Country Views: On The 4th

Well, I managed to get in my usual 4th of July ride in. I try to do that because it is my way to celebrate my freedom to live and move about in this country.

I know many are now focusing on the bad parts of the USA's history and social culture. Ya know what? We aren't perfect. No one said we were. I agree we have a lot of work to do, but all this negativity about certain aspects of our society isn't unifying us toward any solutions and is pretty much divisive. So, I don't buy into either side of it. Until I see positivity and a willingness to forgive and forge new realities, I believe nothing will change. As I look at the world I live in backward from 2020, yeah..... I'm not seeing any unifying actions. I don't see much love. So, I was a bit saddened as I rode this past weekend, but I know this country is the best bet in the world and somehow we will find a way.

In the meantime, I ride. Because that's all I got now. 2020 has pretty much sucked the life out of most things socially. I work, write, and ride. That's about it. I don't see many people. We aren't going out. So, riding is even more of a priority than ever these days. I'm thankful just to get outside and be able to ride. I'm thankful I can be healthy enough to do that.

So, on the 4th, I got out despite the fact that it was hot and dry, (for around here), and I wasn't complaining because I was so happy to just be able to pedal. The first sight I saw after leaving the pavement made me smile so big, despite the fact that it is a sight I've seen so many times. That didn't matter. These times have put things in a different light for me. Don't know about you out there reading this, but for me- yeah, this is a bigger deal than ever now.

So, yeah- 2020 has been super weird. Check out the weather on the 4th. Dry-ish at only 40+ % humidity when we typically would be at high 60's to low 70's for that. The winds were out of the East/Northeast. SUPER odd for this time of year, which generally has Southwesterly winds almost all the time. Even the clouds were heading West. It's almost as if the world was going backward.

I headed South and then East for a ways. I wanted to limit my time out there to around two hours on this hot day. I didn't want to overdo it and get myself knocked down for the count. I know I'm not quite trained up enough for a big ride on a hot day yet. Gotta work on that. Baby steps and all.....

We used to hope that the corn would be 'knee high by the 4th of July' when I was young. Corn was still planted 'on square' back then. Meaning that each seed hill was equidistant from all others in their row and adjacent rows as well. This allowed the cultivators to run at 90° from each pass and at 45° angles each way across the field. I recall looking at these rows as a small child from the window of a speeding 1966 Dodge Coronet. Seeing bare ground at different angles was mesmerizing, in an odd way. I'll never forget that.....

But obviously corn planting is completely different these days. And the hybrids are so vigorous that if the corn isn't 'man high' by the 4th, well, then it is a bad year. Heck, man-high is minimum height nowadays. Seven to eight feet high by the 4th is not unheard of anymore around these parts.

I was truckin' along at a pretty good clip until I got about an hour and a half into the ride. Then I was feeling the heat. I had a slight headache going, and I backed the pace down, stopped a couple times, and just tried to chill out on the work a bit.

The roads were about 75% chunky gravel and the other 25% was really broken down, gritty gravel over hard base. I also came across a stretch of honest-to-goodness "moon dust" gravel where the limestone had been pulverized to a fine, deep powder. I think we could use a little rain again. 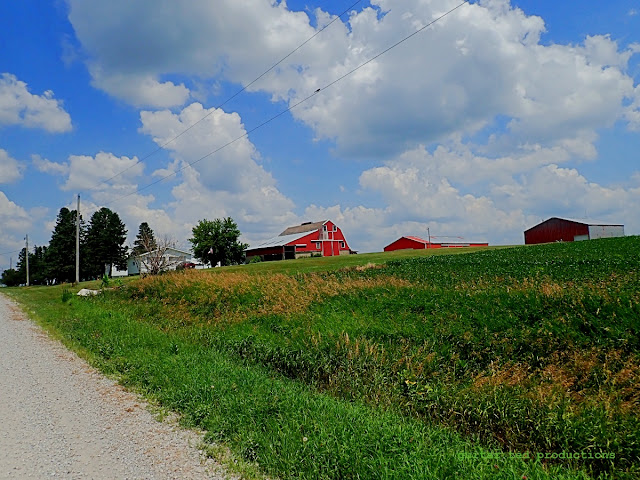 Well, it was a good day out. I got right proper tired, avoided a bonk, and got home to enjoy some relaxation with the family. Not going out for anything now. Sticking around and later when it got dark all hell broke loose with the fireworks people were shooting off. That's another thing I'm not a fan of.

Oh well! It is how things are these days. I hope things change for the better in the future, but for now, I have my freedom, my health, and my bicycles, and I intend to make use of all of that. I hope you all had a great 4th of July.
Posted by Guitar Ted at 1:30 AM

Across the world, it's about rights and responsibilities.

People are quick to claim rights, but neglect their responsibilities - no group is free of this. Doesn't mean all responsibilities are equal - or rather, not everyone can live up to them for a variety of reasons. If we, collectively, can understand the barriers people experience in meeting their repsonsibilities we can begin to do something about it.

I appreciate the embedded political nuances America faces, but really at root it's the same in the UK and everywhere else.

Glad to see you got in such a fine day out on the gravel. We had hot temperatures, high humidity, and a thunderstorm on the afternoon of the fourth. Your sky photo with the bright blue sky and fluffy white clouds is beautiful. It's been hot and dry in southwest Missouri, too. Lots of days this week, thunderstorms are forecast. I was noticing yesterday, while driving home from church, some river bottom corn which looked over man high was heavily tasseled. The guy who farms this land irrigates his crops and does very well. Have a great week and enjoy the peace and quiet since all the bombs have been, hopefully, detonated! Last night, our neighbor a few hundred yards north of us put on quite a nice fireworks display though I could see the largest displays from town and a nearby boys ranch easily on the evening of the fourth. The most fun was having both our little grandsons and their mommy and daddy visiting from St. Louis!

The white flower appears to be a Morning Glory.

Glad you were able to get out for a couple of hours. Spent the day chasing and tracking everyone else enjoying the roads of Guthrie County. It was a rewarding day, despite spending it in the truck, or standing in the sun. 🙂

@MuddyMatt- Thanks for the considered comments. I think, in a broad sense, I agree with what you are saying.

@graveldoc - Thank you. I am glad to read that you had time to spend with family.

@S. Fuller - Thank you and I am happy to see that the event went off well and was feted by many on social media afterward. Congratulations to you, Sarah, and the volunteers.

Checkout the flower may be a Datura

are you advocating "Person high, by the 5th of July?"