A while back we did a Riding Gravel Radio Ranch podcast which we dubbed the "Single Speed Nerd-Out". You can check out that link if you want to. However; this is going to become a semi-regular feature here on G-Ted Productions because (a) I like single speeds and (b) YOU have questions.

Yesterday I received a slew of questions from one reader, and as I often do, I make a post about these questions and answer them in the post. I do this to bring the answers out to many, not just a few, because I know if one of you ask, there's probably ten others wondering the same thing. (Note: Questions edited lightly for clarity) So, here we go......

Answer: Nope! Well.....maybe the ten speed would, but the thing is, the space between the inner plates gets narrower with each incremental rise in cassette cog count compatibility. So- the length of each link remains constant on 3/32nds chain. It is the distance between the inner plates that gets less and less as you add more gears. Take a quick look at any single speed specific 3/32nds chain. Theoretically, the length of each link would interface with any rear cassette cog. The thing is though, the width between the side plates of that chain is so wide it wouldn't drop down between cassette cogs on an 11 speed cassette.  So, if the Surly cog is spec'ed to fit up to a 9 speed chain, you should respect that and not use 10, 11, or 12 speed chains with those cogs because the inner plate dimension would be too narrow to fit over the Surly cog's teeth.

Question: "I have the Surly spacer kit on a 10 speed freehub. Would an additional spacer need to be purchased to use the kit on an 11 speed freehub?"

Answer: No. Your Surly cog, or any single speed cog with a wide base- (Don't use those stamped steel, el-cheapo single speed cogs, or a single cassette cog for single speeding) - those type of wide-based cogs will take up a fair amount of cassette free hub body space, and in all likelihood, you'll end up with an extra spacer or two. 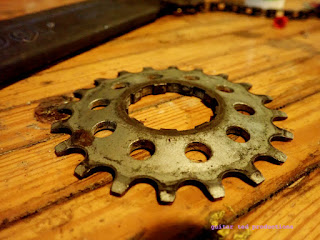 Question: "And then there's the narrow wide chainring. Any limitations on what chain you can use on those?"

Answer: No, not really. The 'narrow-wide' idea was made to interface with 11 speed chain, which as we know from above, has a narrower inner plate dimension than 10 speed chains, 9 speed, and so on. So, I have tested this with an old bit of 7 speed chain and the interface is fine. Sure- there is some slop side to side, but we don't care about chain retention with a single speed. That business is all about 1X drive trains. So, use that narrow-wide chain ring as a single speed ring all you want with a 9 or 8 speed chain for a great single speed set up.

Question: "Some folks will use a bmx chain on 3/32" chainrings and cogs. Some claim 10/11/12 speed chains are too narrow and weak. Others say that's not true.What is up with that?"

Answer: The strength of modern 11 and 12 speed chains has been fine, in terms of 1X and 2X systems with shifting requirements that they are designed for. Of course, we already have discussed how they don't work the best for standard single speed aftermarket cogs. But, lets say they would, for arguments sake. In my opinion, for most folks, those chains would likely be okay, but yes- There isn't as much material there and heavy handed single speed mashers probably would break more 11/12 speed chains than not. But here's the thing- we don't have to use those chains.

Setting up a single speed drive train should be done with regard to how you expect to use the bike. Is this an 'around town cruiser', or is it going to be used on Tour Divide? This will inform your drive train choices. Another thing a lot of people haven't looked into is chain strength measurements. I know that Wipperman has tensile strengths listed on some of their track chains and single speed chains. You can get a real burly chain from them- probably overkill for almost anyone, and never have to worry about chain breakage. But.....they are really heavy!

This is why a lot of riders think they want to use 11 and 12 speed chains, or chains with the window cut-outs, or other silly ideas like hollow pins, etc. Just don't! The amount of grams you save is not worth the increase in risk of failures. Why do that to yourself when a good, solid, cheap PC830 will do the job all day and into next week? I don't use chains because they are light, I use them because I have had really great reliability, and long life from them. Save weight elsewhere, but don't do it with a chain on a single speed. (Bonus tip- never use aluminum chain ring bolts on a SS rig. That's really dumb.) That said, I've had really great success using 9 speed chains too, so just be aware of expectations and don't try to save weight with silly chains.

My 1x1 is close to 20 years old and the HD bmx chain on it is going strong to this day. Its way too heavy but for the few miles I put on it annually things show very little wear.

Thanks for posting SSN-O #1! I'm very thankful to get this feedback from a trustworthy source. I would like to build a single speed BMC Monster Cross (rim brake) if/when Mr. Varley gets another shipment in. I plan to continue to use my Surly cogs and a nine speed chain. I am glad to know that a narrow wide chainring will work with that setup so that it will be easy to go to a 1x setup in the future.