A Moment Of Peace 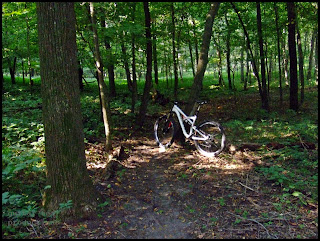 It has been very hot and humid here of late. This weather we're having now is not unheard of, but typically happens in July, not so much at the end of August. The weather prognosticators are saying that temperatures combined with humidity are making it feel like 110°F outside when it is the hottest part of the day.

That is why I high tailed it out to the woods straight away after dropping my son off at school in the morning. I figured on beating the heat by riding before noon. Off to Ingawanis Woods then.

Ingawanis Woods is about 12 miles by car, so I loaded up the truck and headed out there. The daylight was still at a low angle when I got clipped in at about 9:30am. It made trail riding a bit more difficult for the deepness of shadow versus the brilliant sunshine that penetrated in certain spots on the trail. Following the thread of single track was easy once your eyes adjusted to the darkness, only to be blinded, like when an officer of the law shines a light into your eyes at night. (Not that I would know anything about that anymore. It happened to me once as a teenager, but that's a story for another time...)


I was having a good ride and then came up on the turn off to "The Bottoms". This is an area adjacent to the Cedar River and Quarter Mile Section Creek that is easily flooded. We have been shut out of this part of the trail system until recently due to heavy spring flooding and the tendency for this area to take a long time to drain and dry up. It finally has, and so it was opened up a few weeks back.

I decided to drop in off the ridge and see how things were going. I also wanted to stop off and go to my favorite spot on the Cedar River bank just South of the confluence with Quarter Mile Section Creek. It is here that you can spy the eagle's nest in Spring and Fall across the river when the leaves are off. Of course, I couldn't make out where the nest is now, but I was hoping to catch a glimpse of some Bald Eagles.

I carefully made my way down a sandy wash to the banks of the Cedar and just as I emerged from tree cover I saw a Bald Eagle take flight from a sand bar and fly to my side of the river down past Quarter Mile Section Creek. Mission accomplished! But I stayed to just soak in the moment here.

This is about as far away from civilization as you can get in Iowa. No farm views, no signs of humanity. Just peace and quiet- truly quiet. I couldn't hear a thing but birds, water running by, and the gentle breeze in the trees. Times like these are too few in our lives, and I refuse not to grasp onto these times and soak them in when I can get the chance to. I had no idea how long I had been standing there just looking when......

Crash! I heard a loud thrashing in some underbrush. I turned to see a rather large doe staring at me from about 50 yards into the woods. I surmised she was heading down to the bank to have a sip of the Cedar River and stand looking at the same scenery I was when she finally noticed I wasn't a tree. (There were a lot of deer prints in the mud at water's edge under my feet, I noticed.) She stood, then motioned as if she was coming through despite my presence, then she stopped. It was interesting. She wanted to come up to the river, but my presence was obviously upsetting the deer. Finally, the deer made a wheezing, sneezing snort, and stomped off in retreat, making the same noise several more times on the way. Like some unintelligible deer malediction for inconvenient humans in her environment.  She eventually went far enough away that I could no longer see her, but I heard the same noise several more times and then it went silent again. 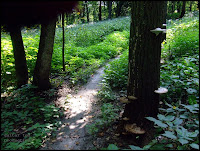 Well, I supposed I should move along as well, so I saddled up after retrieving my bicycle from its wooded parking spot, and clipped in to finish the loop. It was so silent in the woods that the sound of my free hub coasting seemed to be an egregious trespass against the solitude. Soon though I was motoring along, twisting, turning, rising and falling down the dirt ribbon that dissected the gem green under brush still all wet from the evening's dew.

I saw another, (or perhaps it was the same?), deer bounding trough the woods later, and a couple of wild turkeys to boot, but otherwise it was a great morning to be alone in the woods enjoying the cooler temperatures. It was still brutally humid though, and by the time I had finished up, my legs looked like they had been splatter painted in dirt and my clothing was dripping wet.

But I wouldn't trade that moment of peace for anything in the world.
Posted by Guitar Ted at 1:30 AM

Glad to hear you are also one who has the 'spirit of the wild' in your blood when out in the woods. Great post, MS.