I was looking at my son, who was obviously bored, sitting inside with nothing to do, and I said, "Get yer shoes on, we're going for a bike ride." He was curious as to what the agenda would be. Up until now, most of our adventures had started and ended from the front door, but this time I told him we were loading up the truck and ferrying the bikes to "ride in the woods".

The "woods" I meant were the Green Belt, which is a strip of unkempt woods on either side of Black Hawk Creek running Southwest from the city and extending up to 8 or so miles along either side. The Southeastern side has dirt trails that were originally bridle paths back in the 50's but eventually became XC ski trails and left to go wild during the summer months. Bikers and hikers basically keep the way open besides the minimal City maintenance that happens at the beginning of August and whenever a bad storm goes through and downs a bunch of trees.

This is where I learned to ride an off road bike in the late 80's and early 90's. I figured it would suffice to teach the boy some new skills on his, (now too small), 24" wheeled mountain bike.

My son has been jamming in the alley, skidding sideways on the gravel, so I figured he was getting much more confident and stable with his handling. I figured the occasional root and rock would be no issue for him now.

As we got going, I had to remind him about getting out of the saddle, pedals leveled, and letting the bike bounce underneath him. He picked that back up straight away, and we were off doing quite well.

Interestingly enough, it appears that he is a "spinner", while I was and still am more of a "masher". Then again, I never had a derailleur equipped bicycle until I was almost out of my teen years. When I did get one, I didn't know, or care about how to shift the chain, so it was all lost on me! My son, however, gets the geared thing and is pretty adept at switching things to his liking, which, as I said, is mostly on the high cadence side of things. Good for him, I say!

Eventually we ran into the sand traps of the Green Belt. These are an ever changing, shifting sort of a feature along the trails where the creek sheds its sand and pushes it into big drifts whenever it is raging out of its banks, which was most of the earlier part of this year. There were some expected areas for the sand, and a few unexpected, new drifts. These sand piles are made up of very fine sand, which I liken to "hour glass" grade sand. Very fine, and it is really "clean" sand as well. I was told once that back 70-80 years ago the sand in this area was coveted by cement plants for its quality and cleanliness. 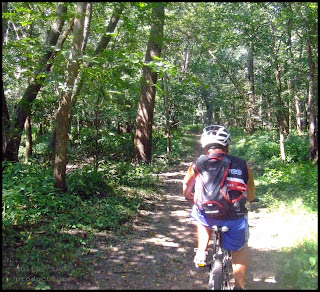 But for my son, well he couldn't care less about cement, hour glasses, or cleanliness of sand. He hates that stuff, and it was driving him nuts not being able to clean his way through the crap. I reminded him that his upcoming fat bike would help a lot with that, and he was wishing he had it NOW!

Ha! Well, he is a bit impatient, and only 10 years old, so I forgave him his little outburst, but I reminded him we needed to stay on task, or there would be no ice cream afterward. Oh yes......ice cream after a hot days riding. That was the goal, after all!

He did well, and we came through pretty much unscathed, excepting my little brush up with some stinging nettles. Those things are packing a particularly intense sting this year. The key, (at least for myself), is to resist touching the affected area at all. It is hard, because it itches and stings so intensely with an almost palpable heat. It actually grows in intensity and then it is gone, as long as you just leave it alone, but that is very hard to do.Fortunately, I won!

The ice cream cones were great, by the way, and my son was tuckered out from the exertion in the very hot, humid conditions. Can't wait to get him on a fat bike!

My 8 year old insisted that we ride to the pool and swim today. It is a 7 mile ride and he does well but he likes to spin. I try to teach him, as well, as my daughter that gears are good.

It is painful for me to watch his legs spinning at a fast cadence and only creep up a hill. Oh we'll, he is out there.

It looks like he will be a better roadie, he doesn't like it when his bike gets dirty and he just wants to crank, no major obstacles.

My daughter loves mud and dirt. She is not interested in long predictable terrain. I think it bores her. It is funny how everyone has different tastes.

Skinny tires for him, fat tires for her. Either way I wish they would listen when I tell them to shift.

@ Irishtsunami: Awesome! Yes- it is just great to see your kids doing ANYTHING other than video games, texting, or watching movies. I saw something today that just resonated with me so much- "Sitting still is the "new" smoking".

So true. Keep on chasing the kids on the bikes and getting outdoors!