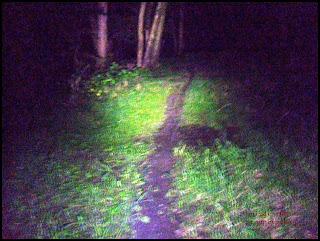 Yesterday I was pretty busy after work writing up my ideas for the Trans Iowa Master's Program. (If you missed what that's all about, see this) But I was getting so many lines cast out I had to stop and clear my brain out. I needed to go for a ride.

It's been quite awhile since I've been on a night ride. I seem to have given away my old, nice night riding light, or I lost it. Don't know which. But since that happened, I haven't been on a good night ride. Well, that got rectified when a new light my friend was testing for Twenty Nine Inches came my way so I could finish up the review. It's one of those ultra-bright, ultra powerful gizmos that you'd have to see to believe.

The light head has two LED's, and the entire case they are in fits into the palm of your hand easily. The light has a six cell battery pack, which is separate, but that's the size of a point and shoot camera on top of another one. Small. You could wrap your hand around it if you are an average sized adult male.

I mention all of this because this thing has the light out put of a shard of the Sun. It puts out that much heat as well. An incredible amount of energy, really, and all from these two components and some wires that weigh less than a can of good beer. Why, a coworker was shining the beam, on high, at his outstretched hand, and the reflected light was burning my retinas! Light reflected off his hand!

Lumens, candle power, Lux- I have mo good idea what any of that really means. I know one thing- this light is crazy bright. Brighter than an automobile light on high, and waaaay more light than I can see myself needing. 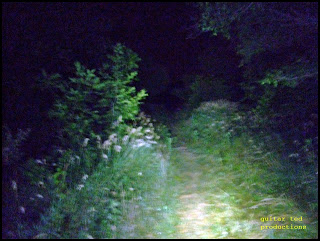 It has five levels. I ran it on the lower two, and couldn't want for more light. It runs at 2.5 hours on high, but no figures were given for lower levels. Heck- I might be able to ride all night on one charge!

But enough about that marvel of technology. I was night riding again! I decided to see what had happened to the Green Belt, since I hadn't been through that way since shortly after Winter. Well, I picked a good time to go. Obviously, from what I saw, the woods have been wracked by high winds over the Spring and Summer, but the City has already mown and cleared the trails in preparation for Winter. You see, those Green Belt trails are XC skiing trails, and around about now is when the City clears out the tall undergrowth and blow downs in preparation for Winter. They've been on this agenda for over 25 years. They've mown this trail and cleared it at this time every year I have been around this area.

So, I found cleared trail, lots of newly laid down sand deposits from the frequent floods we had experienced in May and June, and the trail has changed a bit. It always does after a round of flooding. Combine all this with a night ride and I was down to "trundling speed" on my titanium Mukluk. I was all right with that too.

I dipped down into a muddy flat and did a perfect two wheeled drift. Wee! Then I bounced around roots, slithered through the hour glass fine sand, and ducked broken off branches and low hanging clusters of wet leaves. It was humid, like a jungle, with a mist on the fringes of my light that made it seem like a ghastly apparition was lurking just outside of my sight. Only it wasn't. Just a humid, foggy August evening in the woods. There were about a billion flying insects everywhere too.

I made it over to the little lake out there and shut down the lights, grabbed my flask, and had a wee nip under the stars. I spotted a cloud wrack wreathed in lightning off to the West. "Hmmm......Rain is a comin'. I'd better get on home." It was good to be out at night again though. Been far too long a time since I did that.
Posted by Guitar Ted at 1:30 AM