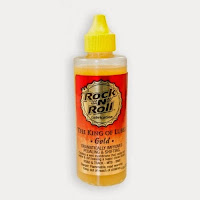 Yesterday I introduced "Round Two" of the "lube-off" and I asked for recommendations for contenders to the past champion, DuMonde Tech. I received a few good suggestions and from those I am going to choose a couple of contenders, tell you why I chose them, and then I am going to ask a final question. So, first the contenders......

Rock & Roll Gold: Gotta love the marketing machines out there. This stuff is dubbed the "King of Lubes" and in their marketing propaganda, it claims that this will clean and lubricate you chain all at once. The application process sounds a bit "messy" to me, but hey! I'll give it a go and see if what they say is true, or not. This came highly recommended to me by a few mechanic friends of mine, so I have a bit of respect for the lube based upon that alone. Still, the claims are pretty outlandish, and I will be watching this one closely.

I have easy access to this stuff as well, since the shop where I work at sells this product. So, I will get a bit of product testing info to pass on to my customers there as well. That also played into this choice. 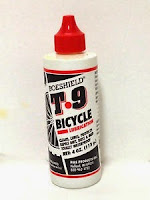 Here's another suggestion and a lubricant I have had recommended to me over the years by several folks. I have never given it a true go on a drive train; however , so this will be a good one for me to try now. Plus, it is also one that is sold at the shop where I work, so I have easy access to this product as well.

It would appear that this lube bases its goodness on a waxy substance that a carrier leaves behind. Again- another lubricant that claims that you do not have to clean your chain before using it. I find claims like these to be kind of outlandish, but again- I'll give this a go to see if there is anything to that.

So, here are two contenders, but I wanted three. I had a couple of oddball requests in the comment section to try out. One was parafin wax- the old roadie standby. I am not going to do that one, since it is like gluing tubulars, only even more arcane. Not that parafin wax wouldn't work, but it isn't practical, and reapplication entails the process be repeated, which isn't all that convenient roadside. By the way, all the other contenders here can be reapplied roadside including the DuMonde Tech.

I found that some of you are not very patient when it comes to lubrication, so the two contenders above will likely appeal to the "low maintenance" crowd. However, I wanted to know if something like White Lightning, Squirt Lube, or maybe a home brew lube might be a thing to throw into the mix here. I also would be open to any new suggestion, but lets get one more lube into the mix here and then we will get this test underway.
Posted by Guitar Ted at 1:30 AM

If you can fit it in, I've used White Lightning in the past and would be interested in how it compares. Thanks!

@bw: White Lightning is another wax based type lube. Seeing as how I already have two others, (Rock & Roll and Boeshield), I am hesitant to add a third, but we will see....

What about Orange Seal's Orange Slide or some Pro Gold or both?

@JYB: Actually, I have used ProGold Lubricant, so that could easily be thrown into the mix here, and it isn't a waxy lube either. That would offset the other two in the test.

I am not familiar at all with Orange Seal's lube. I'll have to look into that one.... Thanks!

@max: Soybean based lubes are a thing that's been around for ten years or so. I am quite familiar with them. (I have a bottle here at the house branded by the factory that makes it) It works great as a cutting tool lube, by the way.

Anyway.... Soy based lubes are thick and tend to attract dust, so for these purposes, it isn't a great choice. (Gravel roads) However; for wet climates, Winter, or where you want a "tenacious' lube, it is good. (The Phil Wood reference is on purpose here.)

How about Nixfrixshun, I've seen it advertised but don't know much about it.

Here's a great lube that I've been using for a couple years...
http://www.lillylube.com/

Try WD-40s dry conditions lube? I've been using it in the shop (rep left some for us to use) but haven't had any customer reports on how well it works (or doesn't) in the long term.

I've recently read that chain saw bar oil is a solid and intriguing choice--of particular interest to me since I oddly have a syrup bottle full of the stuff in my garage but no chain saw. If I recall correctly, it was a tip in one of Jobst Brandt's writings that I encountered in the little flurry of remembrances after his death.
Bryan

@ Jon Steinhauser @james- Both very intriguing lubricants I've never heard of. I think a more broad approach to my test, in terms of recognition and availability to others is probably more prudent. That's not to say I won't look into these obscure products to check them out.

@nathan: yes- we tried it here and I used it on my bike last season. I was not at all impressed.

@all/bjl- Again, it may be great, but too obscure and not readily available in bike shops for this test.

I've been using a homebrew lube for a little while now. 50/50 oderless mineral spirits and motor oil. I have no idea how well it works, but it's so cheap to make and have on hand, I don't hesitate to reapply it quite often so...

I'd be curious how it stacks up against your other choices and by your criteria.

I'd be curious to have ProLink by ProGold in the mix as well. I've used it for years on a road bike and think it is good. I have been using T-9 on my gravel bike.