It was Wednesday and the mighty RAGBY was coming into town. I worked till about noon, bugged out, and got on my Blackborow to see how the Green Belt was doing. I had heard rumors that it had been mowed and was clear enough to ride through.

I had just installed a Rock Shox Bluto fork on the front of the Blackborow recently. My intentions were not to be running these wheels or the dinglespeed drive train on it, but the rest of my parts have not been procured as of yet, so I have to hold off riding, or decide just to go with it as is, and of course, that is what I did.

I had no idea what to expect other than what I had heard from a few trusted folks I know that were pretty positive that it would make my Blackborow better. One of those folks, MG, had plenty of time with one and had lots of good things to say, so I was positive about trying it out, but I didn't really think it would make that much difference. You see, the Green Belt is not necessarily known for it's elevation changes, nor for lots of rough trail features. I already had 4.8" fat bike tires at low pressures, what else could I need? Well, not a lot for the Green Belt, is what I was thinking. I took off on a sunny, pleasant afternoon and headed over to give it a go and see what all the fuss was about. I didn't even check the fork's air spring pressure, which was set by the previous owner and felt plenty stiff to me.

The initial ride over and whatnot was nothing different than usual. Which is a positive thing, I think. Of course, the bike gained a bit of weight in the exchange, but as I pedaled it along, I didn't feel anything dragging me down. The Green Belt was mowed, as reported, so I dove in and cruised the mostly smooth trail for the first sector.

I was going along and feeling good about the bike, but as I have said, the trail wasn't really all that demanding. In fact, at first I thought is was uncommonly dry for having had rain a day before. Much of the initial parts were so dry the earth was cracked.

Then I came across some sand, and I didn't catch this at first, but later on into the trail, I realized that instead of washing out the front wheel, I was able to correct the way the front end was headed, and avert any crashes or stops to catch myself from going down. I feel it was due to the suspension fork being able to absorb my initial corrections which gave me time to get the bike back underneath me and carry on. That was a good thing.

Then I started coming up on some blow downs that had trail work-arounds so you could get by the limbs and what not. This coincided with the occurrence of muddy spots and then out and out mud pits where the big 4.8's showed their worth. I was able to pretty much motor right through without too much trouble at all. All of that done in the "high" range on the dinglespeed drive train. That made me happy, because when I got the bike, using the "high" range wasn't working for me. Now I was pushing that gear with no real problem at all, and even climbing the dikes in it. Guess I must be in better shape than I thought.

I decided to try and take as much of the Green Belt in as possible, so I took several of the spur trails and they were all pretty clear, for the most part. I got into the Robinson Bird Sanctuary portion of the trails and things were still fine with the exception of about three or four blow downs that mostly had ride-able work-arounds already burned in. The sandy stuff way out by Shaulis Road was no big deal for the fat bike. In fact, with all the muddy spots and with the sand, a fat bike is the recommended bike to use out there, I would say. 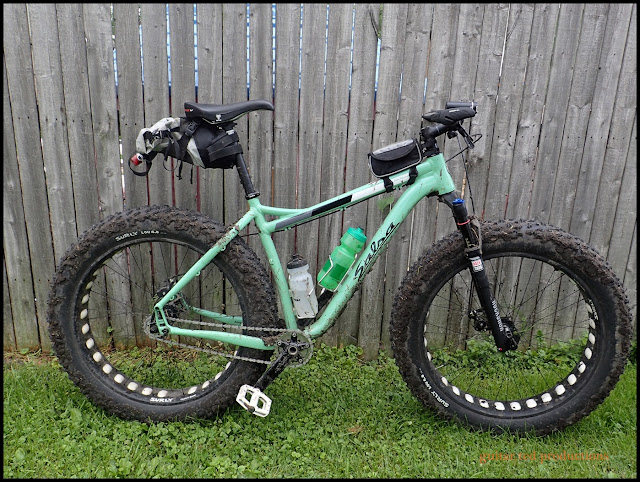 On the way back I rode Marky-Mark, and much to my surprise it was clear and open to ride. That was nice to see. I blazed that trail, (mostly), myself back in 1997, so it is nice to find that, not only that it still exists at all, but that folks seem to care about that connector enough that they keep it clear to ride.

So- is the Bluto worth the trouble? That's a great question that I am inclined to say "yes" to right now. It handled all the gooey mud I threw at it without getting the front wheel bogged down. I used almost all the travel, (see image above for where the orange "O" ring is), and for the most part, I didn't notice any big differences in handling. The ride was definitely smoother, and big jolts were absorbed well so I didn't have numb hands or more fatigue than necessary. I felt cornering was enhanced a bit.

But let's not be hasty. I want to ride this some more on different trails before I get too excited about it. Stay tuned.....
Posted by Guitar Ted at 12:10 AM

Anyone else dropping a new fat fork? Options are good and drive improvements.