There has been some activity on the Trans Iowa front since I announced the dates last month. I have been peering at the maps and devising a course, plus there have been some rumblings concerning the sponsorship of the event already. I haven't got anything solid to share on the sponsorship front yet, but here are a couple of things I can share with ya'all right now.

Registration, if you haven't heard, will be entirely different for the Rookie Class this time. To avoid all the prats and pitfalls of the past edition of the registration for Rookies, this is the plan going forward. NOTE: The Finishers and Vets will register as they did last year. NO CHANGES there.

The Rookies will be doing registration FIRST this time and also they will be doing things by postcard, but that's about as conventional as it gets. The post cards Rookies will send in will be limited to one per entrant, be under a specific size, and will have to be "REAL POST CARDS". This is important to keep things fair. You'll understand why in a moment.

Next, I am going to accept post cards for Rookies for THREE WEEKS. Any and all post cards will be accepted during the specified time. ALL WILL BE SENT U.S.P.S. No exceptions. (NOTE- Not now!!) One card per entrant, of a specified size, with all being "real post cards", (no cardboard, etc), and all during the three week time period. When the window for the mail ins is closed, I will put all the post cards I receive into a bin and I will have someone draw out 40 cards for the 40 open spots on the roster for rookies.

So, if all the cards are nearly equal in size, and all cards are typical post card stock, there shouldn't be any "advantages" or "disadvantages" when the drawing is done. I will say this probably till you are sick of hearing it, but after the drawing is done, it is done. All decisions are final. No waiting lists, or transfers, or what have you. In or out. Simple.

I've gotten very positive feedback on this idea from several sources, so this is what I plan on going with. Any objections should be posted in the comments now. I will announce a "go" date very soon, so stay tuned...

The course is drafted to CP#1, and I have a specific spot I want CP#2 to be at, with a rough draft of the route to it already. Plans are to get out yet this month to start recon. Stay tuned...... 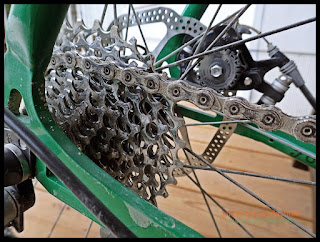 I haven't forgotten about this and I plan on doing more field research as the month of September rolls along. I will be pitting Rock & Roll Gold up against my "champion" so far, DuMonde Tech. I already have some good ideas about where this one will shake out, but I need more time on the Rock & Roll before I give my final verdict.

Just a reminder- This "Lube-Off" is all about riding on gravel roads and may not reflect your reality. However; it is my opinion that there isn't much harsher an environment than gravel roads here where dust is plentiful. Since that dust is essentially groud up rock, it has a rather severe effect on drive train components, so I feel if a lube does a good job in my test, it probably will make a great dry lube for just about anyone.

Later in the year, I hope to do some testing with "wet" type lubes, and that will hopefully be on my fat bikes. Commuting on city streets really taxes a bike in our typical winter conditions, so this should prove to be a good test as well.

The post I put up earlier in the week about the trade shows garnered a lot of comments about the actual subject off line, but was decidedly about "e-bikes" in the comments, which was somewhat expected. However that may be, the off-line commentary was what I really found quite engaging and interesting.

I won't name names or divulge anything shared with me, but it seems that the post struck a nerve and many were giving me some feedback that supported my overall view. I was surprised to find out a couple of my friends weren't going to Interbike and hadn't gone to Eurobike either.

In hindsight, I wondered if a "media blackout" for the show could work in some way. The press could get the inside scoop, have the information embargoed until the show is over, and then the stories could all be unleashed. I thought this might make the show more interesting to dealers to attend it, especially if companies bought into the idea. But then I realized there was no way that would ever work with everyone being a "johnny-on-the-spot" poster these days. I mean, what dealer or employee of a shop wouldn't be firing off everything they saw to online forums and social media? So, it seems that the pre-event releases, demo tours, dealer only events, and instant, online posting of everything you'd want to know about is a deal killer for the traditional trade show format.

Okay, this is it folks! The last big holiday of the Summer. Be safe, have fun, and ride those bicycles!
Posted by Guitar Ted at 1:30 AM

This post is pretty quiet. I heard that Donald Trump likes gravel bikes and thinks that they need a slacker head tube angle and that Hillary Clinton wants all bikes to be e-bikes. Ready, go.............