Country Views: Not The Ride I Was Looking For

Yeah......... This was supposed to be the day I was going to tell you all about my Prairie Burn 100 story. Well, that ain't gonna happen because of a forgetful brain and circumstances. You see, I got up Saturday, drove about halfway to Grinnell, which is 40+ miles, and realized I had forgotten my clipless shoes at home.

Anyway, I turned around and went home. There was no way I could get back to register on time. So, instead, I went to the farmer's market with Mrs. Guitar Ted, I attended a graduation party for one of my son's friends, and then I went on a ride by myself.

It was good. It wasn't the ride I was looking for that morning. It was the ride I needed to do. It was probably a really good thing I didn't do the Prairie Burn 100, in retrospect. I am pretty sure I would have struggled mightily. Not because of anything other than where I am at in Life at the moment. While I cannot divulge what it is exactly that is going on, my work situation is causing major stress at the moment, and I haven't been myself for several weeks now. I think if you know me and have seen me lately, you probably have gotten that vibe. Things have been pretty depressing, and I have had a hard time coping. So, forgetting my shoes doesn't surprise me at all. It is a result of where I am at now. I needed some time alone. Not with a crowd. I apologize to those who were looking forward to seeing me. I hope you can forgive me this indulgence.

So, I headed East. That was the direction the wind was out of and I haven't gone that way in a long time. It was a good ride of over three hours. I turned my phone off. I didn't use my GPS computer. I just rode my bicycle.


Things are greening up out in the country very quickly. There are a few freshly planted fields and more than a few untilled ones. More than I can recollect ever. We used to have this government funded program which paid farmers to leave fields alone for a year, but this isn't because of any subsidy this year. It is because we have had the coldest, wettest May in years.

Obviously you can see that it was a blue bird, big sky kind of day. The east wind was stiff, and it was dry! Low humidity in the upper 20's and lower 30's is super rare this time of year. It felt like I was riding in Kansas! This also has caused the roads to become broken down in many spots to a dusty/sandy condition. Very unusual.

I ended up going as far East as the outskirts of Dunkerton, then North to Bennington Road, then I "stair-stepped" back West and South so I didn't have a long stretch of headwind. The wind was kind of out of the Southeast, but was mainly East. Going South wasn't bad, but it was way slower than going West!

I did extend my "Year Of The Dog" experiences again. This time it was a trio of "ankle biters". One was lame, so it was not really a threat, but the hoary old grey and black dog was still spry and meant business. A younger dog came out last and dared to defy its owner, much to the owner's chagrin. She apologized profusely. It was no big deal, but again.... The dog encounters this year have been off the charts. I have no idea why.


So, it wasn't the Prairie Burn 100. I didn't ride with a bunch of other gravel freaks. I didn't see people that were expecting me. I am truly sorry, but I did get my head on straight Saturday, and that was worth more than anything else to me. I'm pretty sure I wouldn't have had quite the same experience in Grinnell. 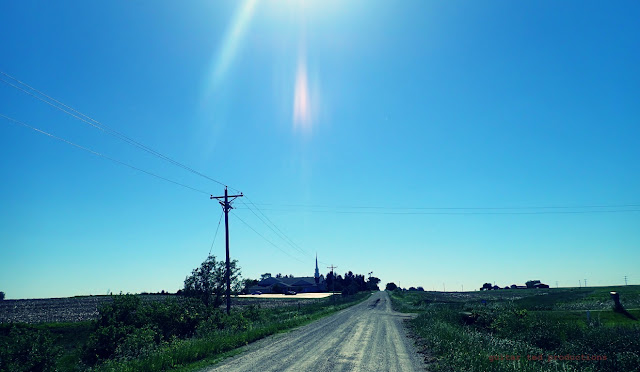 There is light at the end of the tunnel though. I just have to hold out to get there. In the meantime, I am going to keep pedaling, keep my head up, and keep trusting that there is something good coming out of all of this. Time will tell.
Posted by Guitar Ted at 1:30 AM

Someone way smarter than me once said "If you're going through hell,don't stop. I hope things pick up for you.

Sorry to hear about your current work troubles and you shoe follies. Prairie Burn was a great ride and they are already planning one for next year, hopefully things will work better for you next year. I am a bit enamored with Grinnell after the second visit to their quaint town this year so I'm sure we will be back.

I heard rumors you were coming, and while I was bummed to not see you, I also completely understand the need to just go out, ride by yourself and get your head straight. Hope things align for you soon.

Every now and then, you need to have a good talk with yourself because it may well be the best chance of getting an intelligent conversation going.

Thanks for all your hard work. Seriously, future generations will enjoy cycling more because the seeds you have planted will help to make gravel riding safe and sane.