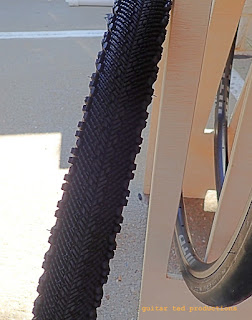 WTB Hints At 700c Versions Of Popular Road Plus Models:

While at Gravel Worlds last Friday, my friend Tony and I visited several company's booths. One of the most intriguing stops was at the WTB booth.

Of course, WTB's main business is tires and saddles which were both on display there. Tony stepped up and asked something about them making a 700c X 50mm Byway. The rep had a very interesting answer.

"Keep an eye on our website for the next couple of weeks."

Now, you can read all sorts of things into that remark, but here are a few facts that might help support my guess, which I will share here in a bit:

First off, WTB has already told me that a 700 X 42 and 700 X 50 Venture tire was due this Summer. (Obviously- that hasn't happened yet) At the time that was announced, there was no word about any other of the Road Plus tires being brought to 700c. However; the rep at Gravel Worlds said the Byway is their number one selling tire. Hmmm....

Also, considering the fact that Eurobike is about to happen starting on September the 4th, an announcement of something new around that time would be totally believable. Many companies announce product ahead of shows so dealers will look for it when they attend a show. That would put an announcement "in a couple of weeks" in the perfect time window for Eurobike.

Finally, WTB, who arguably single handedly made 650B tires a "thing" for gravel with the Road Plus line, have none of those models available in 700c, which is the diameter of tire most gravel bikes come stocked with. Original Equipment (OE) contracts with manufacturers are what makes new product roll into the marketplace. So, if a manufacturer says, "Hey, WTB! Make us this Byway in a 700 X 50 and we'll buy thousands of them.", what do you think WTB would say?

Put all that together and what do you come up with? I am saying that the entire Road Plus line will be announced in 700c sizes. We'll see.......

For more of what I saw at the Gravel Worlds Expo, check out my RidingGravel.com report here.

Have you noted that many new gravel bikes come with dropper post routing but that you almost never see the actual dropper posts on any of these bikes? Yeah.....me too, but that is about to change.

One of the big reasons why this has been is due to the size of almost all gravel bikes internal diameter (ID) on the seat tube. Traditionally this has been 27.2mm. The reason why dropper posts haven't been prominent on gravel bikes is because most dropper posts are 30.9mm and 31.6mm in size, which reflects what an MTB bike's seat tube ID is most commonly.  There are 27.2mm dropper posts, of course, but generally speaking, the dropper range is either too much, the post is too expensive, (Thomson and Fox being prime examples of 27.2mm dropper posts here), or the quality is so poor, that manufacturers are possibly avoiding spec'ing them.

However; and this has been my experience using a dropper post on gravel, the component is something that would be a huge asset to anyone that rides on gravel. Free speed is there for the taking and I, for one, will eventually own a gravel bike with a dropper post. It isn't just a little bit faster on downhills, it is dramatically faster.

"But", you may be thinking,"a dropper post is only for off road, or racers." Think about this scenario then: My fastest downhill speed at Gravel Worlds last weekend was a tic under 40mph. There is no doubt in my mind, based upon my experience riding a dropper post on gravel, that the max speed I would have seen had I been using a dropper post would have easily been closer to 45mph. Think that might affect average speed a bit? Multiply that over tens of down hills where I reached speeds of around 30mph regularly, and it doesn't take a genius to realize that the effect on overall time and speed on course would be greatly affected in a positive way simply by using a dropper post. All that with practically zero energy expenditure to gain that speed and time.

Now with several manufacturers stepping up with quality dropper posts in 27.2mm size, and more gravel/adventure bikes coming with the internal routing for these components, my bet is that dropper posts will become very common at rides in 2020 and beyond. I saw several in use at Gravel Worlds. No longer will you have to sacrifice your nether regions to the abuses of sitting on your top tube, ala Pro roadies, on descents. (And please- don't do that on gravel. It isn't really very safe on pavement!

One thing I wanted to cover before moving on from Gravel Worlds was the gear I used. and in particular, the Schwalbe G - One 29" X 2.35 tires. Of course, you all that have been reading along already know about the issues I had with air loss in the rear tire.

The culprit ended up being a failed rim strip over a spoke hole. That was my fault since that wheel only had one run of tape, and I should have laid down two. Most times I do it that way, but for whatever reasons I had then, I didn't when I built up that wheel set.

Now- I'll talk about the performance of the tires, because I am taking them off this wheel set, and I'll tell you why in a minute. First- these tires are very light and very fast! I weighed them in at 553 and 556 grams. They had absolutely blazing downhill speed and I was able to out-coast anyone around me. That said, I had to really be careful in Nebraska's looser, sandy corners. These tires have very little grip unless the surface is hard and smooth. So, not much to dislike there, but I would also surmise that in Iowa's looser, deep gravel these tires would also be a handful.

Now, as to why I won't be keeping them on this wheel set. First off, these are WTB i19 rims you see in the image and they typically fit tubeless tires from several manufacturers really well. I've used these rims for at least 7 years, I think it has been, and all sorts of different tires have been mounted on these. And.....they all mounted pretty easily. Not so these G - Ones. They were utter Hell to mount because they were too loose! I had to take eight stabs at mounting one of them last week. Eight! I almost gave up. The other one took a few tries. Now that they have been on there, and that I had to dismount the one that gave me the most trouble, it- of course - is looser than when it was new. It's silly. I cannot mount it, nor would I leave it on,  if it would go, because of fear of blowing it off at some point. Of course, I tried it, it will not mount, and there is just no way I am going to fight to make that work. Not in 2019.

So, I have a Stan's based wheel set, a Sun Ringle' pre-built wheel set, and I'll try mounting them on there, but I am in no hurry to do this. Despite the speed and the size of these, I think I wasted my money if all they will securely fit is a Stan's based rim.  I think that is despicable these days. There is no reason for a tubeless tire manufacturer of Schwalbe's stature to have such poor tolerances in their product on the market. Bottom line- If the G - One 29" X 2.35" tires are all like mine, and unless you use Stan's rims, these tires are not recommended.

Note- I spent my own damn money on this product and was not paid, nor bribed for this opinion.

Thanks for reading. have a great weekend!

Thanks for the review!

What is up with manufacturers and bead tightness? Every 29er I've gotten in the last 18 years has been absolute hell to mount because the bead is so tight. I dread flats because I know it's at least a 10-20 minute process to pop it off and remount it... and I had one that was so painful I actually bent the rim.

So I wonder if the G-one would be ok with tubes? Maybe they heard and overcompensated

@ Bill Dinger- Yeah- I'm not sure. I've heard that Schwalbe tires are typically difficult to mount if they are tubeless, so this may be an outlier. Hard to say.

These should be fine with tubes, by the way.

What about using something like a 25-27 inner width rim? I've got 650x2.8" on Stans Baron rims and they fit awesome. Also have 25mm versions on Bontrager Aeolus Pro 3 and again, fit awesome. Haven't had much exposure to other rims besides those two.

@onoffrhodes- The issue isn't inner rim width, it has to do with diameter. I have already tried a Stan's rim, by the way, and- as suspected- the Schwalbe's are a bit too tight on that, but they do go on. This tells me that the tolerances for this particular Schwalbe tire, (maybe not ALL 29 X 2.35 G-Ones), is too far off for standard, "more UST-like" rims such as the WTB TCS rims.

But- I'll take my lumps on this set and not be in the market for Schwalbe's anytime soon. I'm already into them for well over a hundred bucks now with poor results.