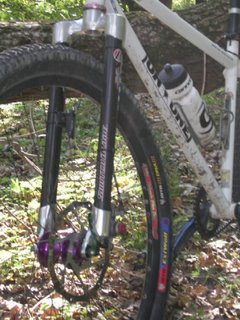 I have gotten to mount up the Switchblade Race X Lite ACC Carbon fork and I have gotten a few rides on it. Here are my first impressions of it.

The fork installation was a breeze. Nothing out of the ordinary. I managed to save some weight by installing this fork over the previously installed Inbred 29″er steel fork. The Inbred fork with an eight inch long steer tube and star nut installed weighed 1225 grams. The Switchblade Race X Lite weighed 950 grams for the same length steer tube and star nut installed. After getting the head set adjusted, it was time to start riding it.

The first few shakedown cruises were commutes back and forth to work to get a handle on what I might expect out on the trail. The first thing I noticed was that road feel was damped out and smaller vibrations were not there that I had felt with the Inbred steel fork. Steering was a bit different too. More on that in a bit. When I slammed the front disc brake, I noticed that the fork really wasn’t flexing a whole lot at or near the crown, like alot of forks do. Instead, it was flexing backwards more and more as I looked closer to the drop outs. Almost in the same manner that a fishing rod might flex. Hmm……different!

The flex was backwards about a half to three quarters of an inch at the drop out. This was in almost nose pick mode, mind you. Normal braking didn’t see that amount of flex. Once I was satisfied that there were no funky handling quirks on road, it was time to delve into the singletrack.

The previously mentioned damped feel on road was also noticed off road. Vibrations that might “buzz” my hands with the steel fork simply were gone. Not a really big deal. I suppose my hands could still get numb after a bit, it’s just going to take longer with the Switchblade on the bike. More importantly, I noticed a big difference in handling around corners.
The Inbred fork has more offset, the Switchblade has less offset. This manifests itself in how the bike handled turns. With the Inbred fork up front, the turns required less input and body english. The corners were negotiated with a more solid, carving type of feel. With the Switchblade, the feel was one of a need for more rider input. I had to “set” the bike up for the corner and it seemed the steering was more from the hips. It liked to snap the back end loose more and had a “flat tracker” kind of feel with the Switchblade. Counter steering seemed more intuitive with the Switchblade. It also seemed that the bike steered better with more lean into the corners. All in all a very different feel.

This is because of the offset more than anything, I think. The offset of the Switchblade gave the bike more trail, and thus a bit “slower” handling. That’s not necessarily a bad trait, it just might not be your cup of tea, that’s all. A “slower” handling bike could also be said to be “less twitchy”, so it’s a matter of degrees in handling. the differences not being so great that it was unrideable either way. But it sure gave my Inbred a different personality!

That’s about it for this installment. I have to wring out this fork some more on some different trails for awhile before I post some final observations. Look for another update in a few weeks. Also, look for another carbon legged beauty to show up for testing on Twenty Nine Inches in the near future! Stay tuned! (Note: previous text first posted on Twenty Nine Inches) 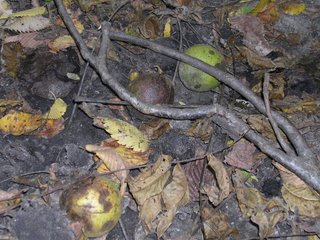 Here is a picture of the trail conditions out at the Green Belt where I rode Sunday. As you can see, there were plenty of walnuts and sticks! This was the norm and the whole ride Sunday was a tooth rattler. The worst thing is going into a corner with all of these golf ball sized nuts lying about. It made for some rather interesting riding!

As for the sticks: well, in the past I would have been cursing them as I rode my geared bike due to the fact that these little wooden demons like to reach up and snag your derailluer. However, with the single speed mode that I seem to be in, this isn't a problem anymore! One really cool thing about disc brakes: rotors cut right through the smaller, dry twigs. Snap! It's pretty cool. Almost like a chipper!

I did get a little nervous when one larger stick got crossways in the front wheel. The stick smacked the fork blade with that plasticky thwack that only carbon fiber can eminate. I stopped fearing the worst, but not even a scratch was to be noticed! Pretty relieving to know that the fork legs can take such abuse and not be damaged. One less thing to have rolling around in the back of my head as I ride down the trail.

Speaking of rolling down the trail: Look for new sleds to be showing up in the coming month here at Guitar Ted Productions and on Twenty Nine Inches. Some big surprises are in store and even some news regarding responsibilities for me that will affect this blog a bit.

Don't worry, it's gonna be a good thing!

More in the coming weeks!