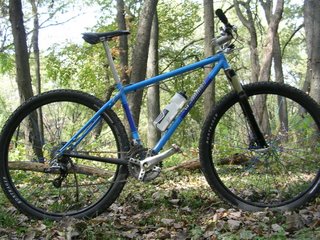 Thanks to the kindness of Ben Witt and Rob Pennell, I have had the pleasure of putting the Badger Cycles Dorothy proto type through it’s paces for awhile now. I wanted to give you all an update on just what it is that I’m testing here.

First of all, this is a proto type. While it is very close to what will become available, I wanted to make mention of a couple of details that will be different on the “production” Dorothy’s. First of all, the rear drop outs, which are a hooded style are going to be changed to a Paragon Machine Works style drop out. The cable routing will be changed from top of the top tube to the underneath side of the top tube with three anchor points for the hydro lines instead of the two found on the proto. Also, the seat tube binder will be changed to a slotted seat tube and collar set up to allow a bolt type collar or quick release collar. The proto also has a Badger decal on the headtube which will not appear on the final versions. A Dorothy likeness in a real metal head badge will take it’s place. These are minor changes and in no way affected the handling or ride characteristics of the bike.

That said, I wanted to give you all a run down on the parts spec on the proto type. It’s quite a list! Keep in mind that the production models could be kitted out any way you want, but this is a fitting spec for such a high quality fillet brazed steel steed. The drivetrain consists of XTR crankset, and front derailluer working with a SRAM X-O trigger shifter set and rear derailluer. The stoppers are by Hope and the wheelset is a blue spoked pair of Industry 9’s laced to Stan’s rims. Those are shod with a pair of front specific Bontrager XR’s in the 2.25″ width. The Bontrager theme is carried on with the saddle, which is a Race XXX Lite that is perched on top of a Moots seat post. Moots also tigged the stem that is clamped to a Seven Cycles custom bend flat bar capped off with cork grips. The front fork duties are carried out by the White Brothers 80mm travel suspension fork with the IMV system. Finally, the wheels are clamped in by the good old reliable Salsa skewers that are so easy on the hands. One of the more interesting spec choices was the Dura Ace 12-27 cassette, which worked perfectly on the trails that I rode the Dorothy on. Certainly that’s not going to be everybodies first choice for a rear cassette, but this old single speeder never complained a bit!

The parts were very impressive, to say the least, but I had a couple of quibbles with the titanium cockpit parts. So I contacted Ben and discussed the parts in question and decided that it might be a good idea to try an aluminum handle bar and stem for awhile. The problem with the titanium bar and stem is that they are sooo compliant that it masks what I’m trying to feel in the frame. Nice stuff, and no complaints on the super smooth ride that these parts provide, but I’m going to swap out to aluminum bits and give that a try. I’ll report back in a week with a final report.

Until then all I will say is that I have had a silly grin on every time I have ridden this bike that just won’t go away! Stay tuned!
Posted by Guitar Ted at 5:27 AM