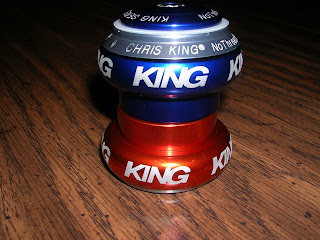 If you didn't see my post from last Sunday , you missed what this is all about here. Check that out and also be informed that this is the head set for one of the "Secret Project" bikes that I am having custom built.

This should clue you in to the color scheme at least!

(Thanks Chris! This head set will look great!) 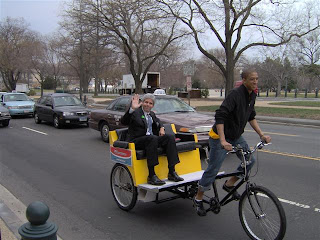 Here we have a picture that was kindly sent to me by David of Planet Bike.

One of the really cool things about the summit is that they are trying to influence lawmakers to adopt a measure that would reimburse commuters that use bicycles through a tax credit. This could be huge for us that already commute by bike and would be a great influence to others considering doing it.

Speaking of commuting to work, next week is "Bike To Work Week", so get yer lazy but outta bed a bit earlier and ride that bike to work next week. I'll be doing it, so will many others. Here's a guy that commutes every day. I wonder if he packs that heat while plying the streets of Charolotte N.C. ? Heh heh!

Check out Mike Curiaks "lunch ride" on the newest all mountain bike from Lenz Sport. Yes......those are the 29 inch wheels that are too weak and too heavy to use as a serious trail bike. I've got to say, Mike says these are moves he hasn't been able to pull off before, but he makes them look awfully easy here. Anyway, somebody out there is eating some crow after seeing these clips!

My good buddy Jason spoke of a Guitar Ted Ride and Smile get together yesterday in the comments section. How about June 9th or 10th people? In Minny-apple-pus? Sound off if'n ya thinks that is a good idea or not.