How A "Little Ride" Turned Epic 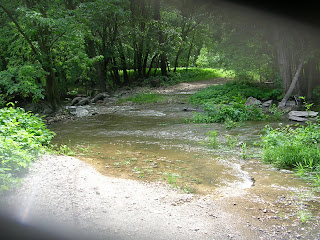 After the Leb ride I decided a nice spin through the State Park and up the fire road to Washington Access via Black Hawk Park was in order. A nice quiet flat ride. Yeah right!

First and most alarming was my endo in Geo Wyth State Park. A simple log crossing had me turned into a lawn dart. Really.......we're talking full on crash with all my weight on the head! I heard several popping and crunching noises from my neck. Scary! The good news was that I was all right. Other than a helmet full of mud, I was able to continue, although I'll be shopping for a new lid today! After gathering my self up and dusting off, I went along my way, none the worse for wear. I tell you, it was a miracle I wasn't injured!

The first picture above shows what I found once I hit the fire road just out of Black Hawk Park. That water was cold and hub deep! At least it was over a gravel bottom and not mucky river silt. 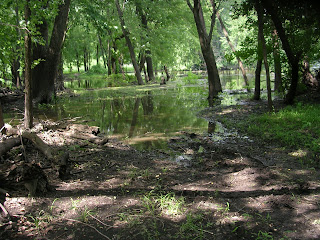 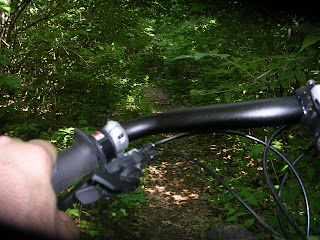 This is what I found. While the fire road was getting pretty overgrown and had a few blow downs, this cut off was completely unrideable due to weeds, downed trees, and overgrowth. Here you can see my handle bar height view. Any higher and I wouldn't have made it through because of the vegetation. Oh, and did I mention the 100 yards or so of nettles that I had to walk through? Yeeeooow! That stuff itches for a bit, but leave your hands off your legs, and the sensations subside, but oh! It's tough to endure it! By the time I walked out of there I had overcome it, so I was able to put that behind me. 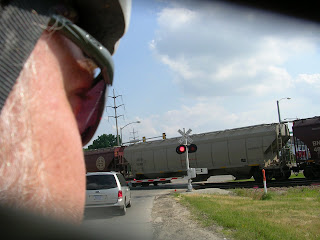 Once out on Ford Road I enjoyed gravel road goodness and 25 to 30mph winds! I traversed over to just north of Waterloo on Mount Vernon Road and then straight into the teeth of the wind on Burton back into town. Even with the buildings all around me, the wind was still a force to be reckoned with. I guess Mr. 24 is right. The wind is our mountain!

Once into town I came upon this forced work stoppage. I suppose it was a much needed rest stop after grinding against that wind. Once the behemoth had passed I went on home with no further drama. It was a four and a half hour epic that was supposed to be a nice little recovery spin! Uh huh, whatever!

I'm not going to complain about it, and I don't mean it to sound as if I am. The way I figure it, I'm blessed to still be walking!

Much less ride a bicycle!
Posted by Guitar Ted at 5:38 AM