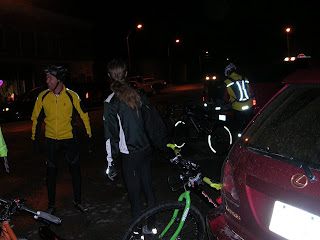 The start in Marengo. We raised a few eyebrows of the orange clad gun toters! They were all hittin' up breakfast at Doose's Cafe, just to the left of the view here. Most of them probably had never seen anything like us freaks before! 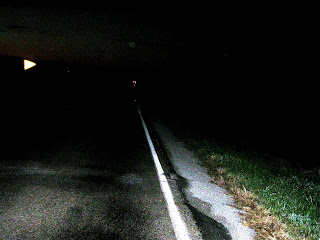 Here's a short break from the gravely goodness in the wee hours just before dawn. That's d.p. just ahead of me. The rest of the group had just made a sharp right hander up a gravel road before I snapped this pic. Although it had rained just hours previous to our passing, the roads were in excellent shape. 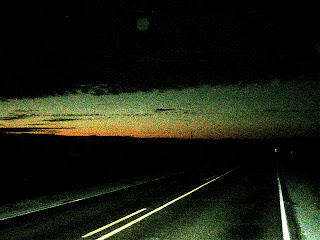 Here's a better shot of what the sky actually looked like. Yes, that dot above the white vertical line is d.p. again. 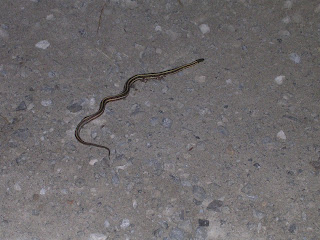 A victim of the cold. This snake was motionless, assumed dead, although no one would bother to try and handle it. I even provoked someone to try, but got no takers.

I'm thinking it was dead. Tail looked smashed and at 42 degrees, reptiles probably don't last too long on heat sucking gravel. Just a guess though.

I think the snake represented my day. Snakebitten! I'll be back to tackle those hills some other day, you can be assured of that!


Oh yeah, even though I had to bail out, I did stop and have a silent toast of Stranahan's to one gal who wished she woulda been there. Stopped at a bridge over the Iowa River and did a couple shots worth. Seemed appropriate. Get well soon, Em!
Posted by Guitar Ted at 8:38 PM