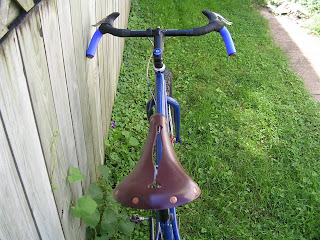 I've been noticing a lot of activity on the web regarding the attributes of the Origin 8 Gary Bar. For some details on the bar, check out my previous posts on it here and here.

I've also added a couple shots I took of my Pofahl 29"er custom that I hop illustrate what the bars look like mounted up and ready to go.

Now I'd like to address a few misperceptions about this bar and it's inevitable comparisons to a On One Midge Bar. The Midge, which made off road drop bar use a reality again, is a bar that was co-designed by a fellow named Don Person, better known on the web-o-sphere as "shiggy".
He and Brant Richards of On One worked diligently to bring what they believed to be the perfection of the old WTB drop bar that was originally a modified Cinelli road bar. The Midge proved to be a great success and works great for off road cycling.

Enter Origin 8, which is a "house brand" of J&B Importers. They made the Gary Bar as a competitor to the Midge. It's a drop bar for off roading that is more similar than different in comparison to the Midge, which I detailed in one of my original posts on these bars. (link above) The main difference being the "slope" of the bars from the bar tops to the drops. This is most easily seen from the front view of the bar. 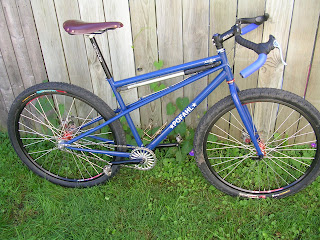 The slope is there on both the Midge and the Gary for a reason. It's to help clear your wrists and forearms while in the drops for off road maneuverability. Without the slope, if you were to thrust your bike sideways for instance, leaning it to make a small steering correction, you would smack your wrists and fore arm into the upper side of the drop bar. So slope is important for increased maneuverability off road. The Origin 8 bar has more slope, which isn't a bad thing off road. This; however, places the brake levers at an unusual position compared to a Midge and especially compared to any drop bar we're used to seeing.

Is that a problem? I really think that it's perceived as a problem that's not really there. For instance, take a look at a mustache bar. The brake levers are on their sides, for crying out loud! I've never heard a complaint about that, and as a matter of fact, some folks praise the position as super comfortable while palming the hoods on a mustache set up. So the Gary Bar is about halfway between that mustache bar and a Midge. I feel it gives my hands a great perch to rest on, but I would say give it a try first before you pass it off as being "non-functional". Besides, you are not supposed to be riding on the hoods of a drop bar in the first place. A point that most are either ignorant of or reject out of hand. I use the hoods rarely off road, and mostly only on longer gravel grinders.

Other than that main functional/aesthetic difference, the two bars- Midge and Gary- are rather similar. The Midge being a more refined bar, the Gary a bit cruder. Both are fantastic off road bar choices, and either should prove to be a great choice for your off road drop bar rig. I like both and recommend both for their intended purposes. The only thing I find that is a bit more appealing in the case of the Gary Bar is it's price, which I think is a killer bargain for what you get. On a budget? The Gary is the obvious choice. Want a more refined, lighter weight bar? Midge is the way to go. Functionally their is very little difference, so either way should work well.