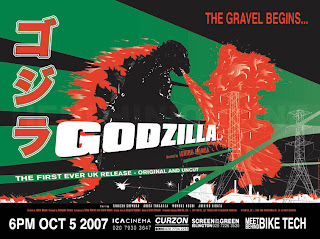 First Up, One For The Locals: In the tradition of Fall Friday night gravel grinders established by Mr.24 we have the "swan song" event. Since Jeff is vacating the area for Ft. Collins, CO soon, this may be your last chance to grind the lime with him. Digging the Godzilla theme here! Very cool!
Anyway, the pertinent info is embedded in the altered movie poster, as usual. Be there!
The Following Announcement Courtesy of Twin Six: It's time once again for the TWIN SIX SORT OF BI-ANNUAL FOUR DAY SALE. From Thursday 10/4 through Sunday 10/7 you can get all sorts of T6 goodness on the cheap. 2007 T6 men’s and women’s jerseys that are still in stock will be $45. Also, all of the 2007 T6 men’s and women’s t-shirts will be $15 (find them in the TRUNK section). In addition to what’s on sale, we just launched all of the 2008 T6 t-shirts, and a few of them are prototypes marked down to $12. The sale starts Thursday 10/4 and ends Sunday 10/7. Get while the gettin’s good.Ride with pride,TWIN SIX http://www.twinsix.com/ BTW: Shipping is free on orders over $100!
So there you have it! My commercial post! Stock up on T-6 goods and grind gravel with Mr. 24. What could be better? What else would you ever need? You'd be crazy not to do it.
Large Wheels Roaming The Earth: Word from up in Minnesota is that another 36"er roams the Earth. This would be Ben Witt's second Pofahl built design of his. Another Minneapolis builder has one as well that some of you may have seen/heard about at Chequamegon this year. Check out the two newest 36"ers here. (By the way, Ben built the wheels on that Minneapolis built rig) Fun stuff!
At least I posted some real bicycle stuff today! Ha ha! Now quit readin' and go ridin'!
Posted by Guitar Ted at 5:32 AM