"Once you held your finger on the trigger.
Now the gun is pointing at your head.
Once you reigned supreme,
Over all that you could see.
Now you walk on the other
side of the street. "

"How The Mighty Fall" by The Alarm

Well, if you haven't heard by now, supposedly the most damning evidence against Lance Armstrong will be presented on "60 Minutes" Sunday as they interview Tyler Hamilton, himself a convicted doper, and former lieutenant of Armstrong's in his early Tour victories.

Look, whatever you might think about doping, Lance Armstrong, his foundation's work, and the "effects" he had on cycling, the bigger picture here is that Americans, nay- The World, loves, loves, loves, to tear down the exalted. And we're witnessing the piecemeal dismantling of "Lance" into a mere mortal. Sunday will be just one more wrecking ball to the icon. Frankly, I'm amazed it took this long for it to happen. (Disregarding "the truth", whatever that may be.)

Still, there is another, human side to this, and it is very disappointing for a lot of folks, I am sure. Lyrics from "The Alarm " come to mind once again......(From "Sold Me Down The River " ) 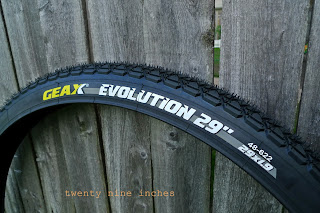 
In the past, I have run stories on Twenty Nine Inches about commuting on 29 inch wheeled bikes and have gotten an overwhelming response confirming that many folks are using the big wheels to get around town on.

So, it was great interest that I heard about these new 29"er tires by Geax called the "Evolution" and that they were aimed at folks commuting on 29"ers.

Now I have a pair in hand to test on Twenty Nine Inches, and I will link my thoughts here as that unfolds. Right now, I haven't gotten any details on the availability of these, or how much they might be, but that will also be coming soon. You know what? I think these could even be great gravel road riding tires too.

Good Luck Cheq 100 Riders! Saturday is the second Chequamegon 100 event up around Cable, Wisconsin. Those are some mighty fine trails up there, and by the sounds of it, the weather is conspiring to make this one epic event. (70% chance of afternoon thundershowers, anyone?) If it does rain, it'll be chilly in them thar woods, I know that much, and riders better be prepared to be layered up, and then be prepared to peel it all off the minute the sun comes back out. In fact, these conditions sound a lot like the last time I rode up there. It was showering intermittently, then the sun would shine, and the humidity would kill ya!

Well, at any rate, the stories out of this event should be good. Good luck to Captain Bob, and Mike J, who are locals going up for this ultra-mtb ride.


Have a great weekend and I hope ya'all get some bike riding in.
Posted by Guitar Ted at 1:00 AM

Mark - do you think those tires would work on the Monster Cross. I am running the 1.9 Kenda Karma right now.

@Bill G: Yes, they should do well. I mounted one up last night, and it is slightly smaller than my XR-1 which fits my BMC Monster Cross quite easily. These Evolutions should fit with no issues.

Those look like an incredible gravel tire GT!!
CQ