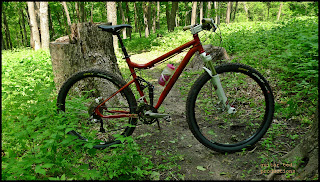 <===Big Mama on the South Side

The big holiday weekend brought with it some real warmth and humidity. Finally. Maybe now I can pack away the woolen goods for a few months! I did that a few weeks ago, but  it still stayed really cool in the mornings, requiring something warm for commuting. I think those days are gone for awhile now.

Anyway, I got three days of riding in, but they were three very different rides. My son, who will be 8 in July, just learned how to ride this past spring, and now wants to go further abroad than just "around the block". So, I obliged him with his first "on street" lesson. We went about a mile from home on back streets and back again. At the turn around point, I surprised him with about 30 yards of off road path. He didn't flinch, but his way-to-high-geared BMX street/park bike made the dip a bit of a challenge!

The following day, we did the same path again, and this time he did better, clearing the single track section, and learning that "burning legs" on uphills is something "normal" for cycling. We then did several laps around the block, and through the alley. He dumped the bike on a left hander, scratching up his arm in the process. But now, instead of crying, he gets up, jumps up and down a bit, and walks in a big circle in silence. Not sure where that came from, but I'll bet it is play ground related.

Later in the day, I took out the Xtracycle, and my son and I went to a graduation ceremony on it. You'd have thought we were aliens by the looks on peoples faces. 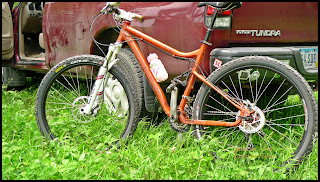 Monday was a ride on my own on the Camp's South Side. I ran across Paul M who was out weed-whacking the whole network of trails. The loop, along with new sections just added in, are all good to go now. Only a bit on the lower end is still too wet to ride.

I rode the loop both ways and had a great time. The combined heat and humidity made for some slow going, since I am not used to that just yet, but I made it through pretty well. The dirt was about perfect. Not too dry, not too wet, and no greasy spots. I had a great time for a couple of hours. I even saw a Bald Eagle up close. Pretty appropriate for memorial Day, I'd say!
Posted by Guitar Ted at 1:00 AM

Yo. Do you have any compare/contrasts between the Big Mama & the Spearfish? Thanks, Mike

@MICHAEL: Well, keeping in mind that the Big Mama is a 4" travel bike design, and in my opinion, the new Big Mama, (when it comes out), needs to be at least 5" travel, the comparison to a Spearfish is maybe a bit unfair.

The Big Mama has a more softer approach off the top, when it is working at its best, and has a more linear, longer feeling suspension to start with which ramps up pretty hard towards the end of the stroke.

The Spearfish feels more "racy", but if you kick the air spring down a few psi, it starts to feel more "Big Mama-like", while you can do a reverse, similar thing with a Big Mama and get a more efficient feeling, XC type of feel going on there.

Looking at the construction of the Big Mama, you'd expect it to be able to slam big terrain, and not flinch. The Spearfish is sleeker, lighter, and by nature, not as "big" as the Big Mama. Not just in terms of travel, and suspension feel, but also in terms of chassis design, toughness, and stiffness.

The Big Mama needs a tweaking though, and I am sure Salsa saw that once they got to seeing where the market was headed after its initial release. I would like to see a tapered head tube, a rear through axle, and as I said, at least 5" of travel. If they can do that, and shorten the chain stays,and slacken the head angle a bit- wow! That's my bike right there.

I also look for Salsa to do a "Inbetweener" model at 4" as well.

Thanks for the expertise....I want a Spearfish, but since they are not available, I am looking at other FS 29'ers instead for my 'serious' off-roading fun bike. Right now I have rigid SS Monkey and a 1999 GF Paragon (little wheeled, but still fun) for singletrack, and was looking for something to smoothe out the big bumps; thats why the Spearfish seemed perfect to me.