Well, it was "that" year, was it not? The proverbial year Trans Iowa would enjoy the decent weather that would allow for a finish, as the legend goes about this event.


Eighteen: A decent amount of finishers, and good stuff happening from the get-go within the field. There was drama, and the event wasn't decided until very near the end of 330 or so miles. Everyone was accounted for, and by many accounts I have read, the event was well received. 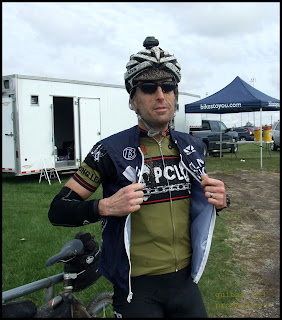 That isn't to say that there weren't dissenting opinions. There were, (are), but you know, most folks just have no idea how it almost all came unraveled. I won't go into that here. Just know that this Trans Iowa was as stressful as T.I.V3 was, and from my perspective, the event is considered one of the most difficult things I have gone through in a long time.

To have it go as well as it did is great, but I am not celebrating. I'm just glad it is over.

Ultimately this event for me is about the people. On one hand it is great to get to see everyone gathered together to ride bicycles. On the other hand it seems as though the time is way too short. I don't get to chat with everyone, and some not at all.

Putting on this event is a huge under taking. It saps a lot of time, energy, and funds from things that maybe I ought to be giving those things to instead. I can not speak for David, but as for myself, that becomes the point of contention within me at this time of the year. Trans Iowa isn't a free event, and the few people that are paying for it are paying dearly. Maybe in a few months the assessment will look better. I am purposefully avoiding the "accountant" at this point, because I am tired and emotionally drained. 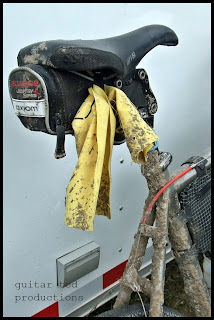 Thank You: First, to my co-director, David Pals, who had to fit whatever he could for Trans Iowa into a very tiny space at great sacrifice to him and his family. The "prayer flags" were awesome. Thanks!

To Grinnell Iowa: The Grinnell Chamber of Commerce, Sheryl Parmely of the Chamber, Bikes To You, Craig Cooper, The Grinnell Steakhouse and staff, and anyone in Grinnell that put some effort out on Trans Iowa's behalf. No community has ever rolled out the red carpet for T.I. like you have!

To Trans Iowa V7's Volunteers: Once again, people came together to spend a day or more of their hard earned free time to facilitate an event they would get no recompense for. Amazing. Humbling. Thank you from the bottom of my heart.

To Trans Iowa's Sponsors: You enhanced the event by your support. Thank you so much: Twin Six, Gu Energy, Cliff Bar, Hiawatha Cyclery, and Banjo Brothers. Special mention for Europa Cycle and Ski who paid the fuel bill for the event weekend.

Media: Special shout out to Steve Fuller, the Official Event Photographer, and to Jeff Fring, for coming and filming the event. I thank you for seeing something worthwhile in Trans Iowa that made your creative juices flow. Things you thought were worthwhile to share with the world.

And Of Couse, To The Riders Of Trans Iowa V7: It wouldn't be anything without every one of you coming to ride on these gravel and dirt roads in Iowa. Even if you only made it a few miles, you have my deepest respect. If you got part way, got lost, had an adventure, or for whatever reason, you didn't get to Grinnell again, I hope you found something out there worth holding on to. I am humbled by your efforts. If you were one of the 18 that finished, my hats off to you. What an accomplishment. Amazing! 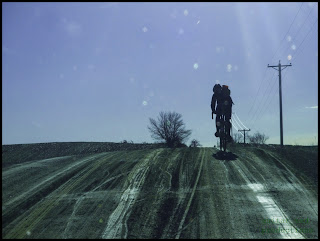 And that's that.  Trans Iowa V7 is over and done with for me.

For now I need to recover, rejuvenate, and ride. Much like the rider in this image from Saturday morning of T.I.V7, I need to ride over that hill to an unknown horizon in the sun. Will I come back to be involved in another Trans Iowa?

Mark,
I know after the event you're drained and need family time and to mentally get past all that Trans Iowa involves. I can't speak for everyone, but I'll keep coming back if you keep hosting Trans-Iowa or other gravel road races in Iowa, like the stage race you threw out for discussion this year. Happy riding and enjoy your family, thank you again for putting on T.I.7, I'm still smiling thinking about it.

Trans Iowa humbled me greatly, kicked my butt, and tossed me in the emotional laundry and yet I want to come back.
Thanks for the great event. My family and I enjoyed the weekend. We'll be back.
Ben

Mark, At the finish I said "never again!". Now, a week removed, I'm already considering my return to a TIv8, should there be one:) Thanks to you & David for everything you did, amazing undertaking. Thanks to all the volunteers & to everyone that had a hand in pulling this off. TI allowed me to expand my understanding of myself & my limits, or is that lack of limits? How far can you take yourself? Don't know until you try! TI allowed me to forge new friendships & solidify the existing ones, thanks again, Troy

Mark,
It is with deep respect and fondness that I thank you and D.P. for all your efforts. The route you guys picked was amazing. The countryside of Iowa is spectacular and the whole experience was exceptional. I really hope there will be a next time where we can again gather and enjoy eachothers company. Thank you very much and I hope to ride with you soon. Thank you Grinnell, thank you volunteers, thank you Iowa for destroying my legs.
Wow!
Ari Andonopoulos
Slender Fungus Cycling Association.

thanks for the event Mark. i've been looking forward to it for years now, and the anticipation is always crushing! i can only imagine what it is like for you and Dave.

on the drive out i was pretty sure TIv7 would be my last attempt. but when my riding partner this year said, "next year, i'm going to kick this event's ass" that was enought of a spark to get me excited about another.

A huge thanks to you and David for putting on the event. I had such a great experience for my first T.I. and hope that you continue to hold the event. I know the event is not free for you guys, nor for the riders and it takes its toll on everyone. But to have everything finally fall into place and be out on the gravel roads in Iowa with such great people and friends was truly priceless. Hope to see you in DK200 and really hope to see you for TI.V8. Thanks Again!

Have you thought about taking donations for the TI pot? I think you might find that the kind of people that come to this event would more often than not be willing to open their wallets to keep the event going for future years and possibly even make it better. I bet some donations might exceed a typical race entry fee or tour fee as well. Just a thought.

@Wet Shrub: That has been suggested before, but for specific reasons I won't get into here, that isn't really an option. Essentially, it would fundamentally change the event and take it somewhere I am not willing to go with it.

Mark,
Huge thanks to you and Dave for putting on this event. What an incredible day and a half for all the riders. TIv7 will always be one of the highlights of my life, and I thank you from the bottom of my heart for all your efforts to make it happen. So many memories, so much happened in those 34 hours that will stay with me forever.
Hope you can recharge your batteries and have a great summer of riding and spending time doing whatever else you love!
Scott B.

Thanks again for making T.I. an unforgettable experience. In spite of all my failures I keep coming back. I certainly understand keeping the event free (to riders) and all that that entails. There are good reasons I won't put on a race of my own (event, challenge, tour, okay), but I certainly appreciate those who do. If you should decide to put on another T.I. I will be there in some capacity.

Mark,
I know Trans Iowa comes at a great expense to Dave and your families. All I can say is thank you and all that were involved from the bottom of my heart. As a rookie I wasn't sure of what to expect. I can say that it didn't disappoint. I had a blast. I already thinking about T.I.V.8. if there happens to be one. Many thanks.

Thank you very much for a great race. Being a first timer I learned alot! Thank you to the vets for helping us first timers. Rest and enjoy the summer-you deserve it. We all know that these races don't come off without countless hours of energy. THANK YOU!!!

Thank you so much for putting on TIv7; it is such a cool experience to drop into a new region of the country for a long ride in territory that is utterly virgin to me. I really look forward to the challenge if TIv8 occurs and hope to bring a few rookies from the east coast in tow.