Give Peace A Chance: Ride A Bicycle 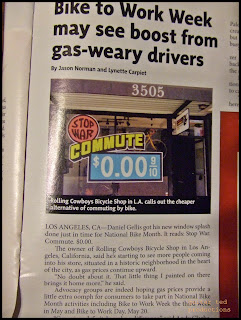 <===From a recent issue of "Bicycle Retailer and Industry News.

You know, I was flipping through a recent issue of "Bicycle Retailer and Industry News when this picture here caught my attention. It was what was painted on the shop door- "Stop War Commute $0.00 9/10 "

Obviously, I am  for bicycle use, commuting by bicycle, and all. However; this was the first time I had seen any reference to "stopping war" connected to using bicycles. Funny thing is, I've made that connection all along.

I'm not one to get all political. I also haven't ever said much about this to anyone before, but riding a bicycle has always had a sort of meaning to me. One that was connected to "doing something" in light of the wars we find ourselves embroiled in these days. Right or wrong, I see them as being connected inextricably to our dependance as a nation on oil. I figure that every time I decide to use my bicycle instead of a car, I am distancing this nation, a tiny, tiny bit more, from its dependance on oil. I know I am only "one guy". Maybe you are laughing right now about this, thinking I am foolish. How could riding a bicycle save this country from anything? Well, here are a few facts to chew on.

Before I started bicycle commuting, I filled up my car with gas every week, and got my regular oil changes every 3000 miles, which happened a lot every year. Now? I fill my tank maybe once a month, and I don't get to 3000 miles between oil changes, because now I have to change oil less often, and do it based on time, rather than on mileage. So, in other words, I am using waaaay less oil than I used to, and I am looking for ways to lessen that even more by using a cargo bike, and running errands by bicycle, or (gasp!), by walking places.

What if we all did that? I bet it would make a huge difference. Maybe it could even end a war. Maybe. Even if it didn't end a war, it would make our country's dependance on oil a lot lower, and us as a nation a lot healthier. You and I would save a lot of money. You'll never know unless you give it a chance.

Something to consider this Memorial Day Weekend.
Posted by Guitar Ted at 1:00 AM

Have you noticed that the most bike friendly nations of Europe do not have a domestic car company? Therefore they can charge high taxes on cars, build bike paths, and enforce traffic laws correctly. Oh, and I don't think the Netherlands or Denmark have soldiers in oil wars.

Years ago I used to go everywhere by bicycle, rain,snow,and this was up in SLC. I still ride alot, but on mtb trails etc. I need to do the commuting thing again.

Every person helps if they commute by foot, bike, scooter, Vespa, bus, train, etc... - so even though you are only one guy GTed - it helps. Keep on keepin' on. I commute to work as much as possible during the academic year and may be adding fenders for the upcoming year to increase my number of commute days. I still haven't met a car in town that understands what a bicycle on the street means and can pretty much count on everyone pulling out in front of me or turning in front of me, but I'm used to it. It sure was much easier commuting in Europe than in Indianola - which seems odd, but it's true.

Speaking of the 3000 mile "oil change" - it is an age old industry myth which wastes oil and dollars. You can safely go a lot, lot longer (miles wise) than 3K. I change it myself every 8-10K miles in our Honda Elements and my wife's car. Some cars, due to high use or age, may meet the requirements where they need it every 5 - 7.5K miles, but 3K is way to soon and is not environmentally friendly or cost effective. I'd consider moving that number up to at least 5K, if not more. That'll make you one more guy "twice", rather than just the once due to your commuting. ;-)

Sad to say on memorial day but war and hate predate man's need for oil.
Live small with a big heart and an open mind.
Great blog post.
Thank a vet today.
Thanks vets!

Also, who thinks about War when they are riding their bike?

GalaxySearchlights...You are welcome. And that is good advice.

And GT: You are not just one man. Already seven agree.

That is the same reason I started commuting by bike too - I got a Montague folding bike so it's easier to take on public transportation, and I ride it as much as I can. I like to think I'm helping with the war situation a little bit too.