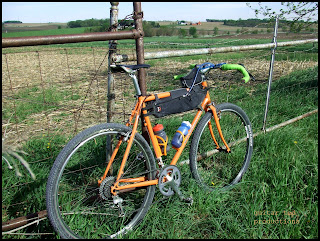 .......But It Was A Ride! Saturday, as most folks in the Mid-West know, was a washout. Oh yeah.......except for those Almanzo 100 and Royal 165 dudes and dudettes.  Congrats to all who toed the line in those challenging conditions.

No, I wasn't going to take an option on riding Saturday, as it was pouring rain for most of the day. The plan was to go down south and scout some of the route for the GTDRI. But that wasn't to be, with the weather that we had. I thought maybe Sunday might work out, but we had a special meeting at 12:30pm and I didn't know how long it might run. I thought that if I got out early, there might be a chance to get some of that recon in. The weather was actually nice too. 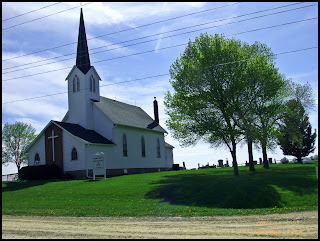 <===A late 19th Century church on my route Sunday.

Well, the meeting lasted longer than I thought, and I had to scrap the plan to recon down south. I instead went for a ride into the wind first, which was out of the north.

And what a wind! (Not like the wind I lived through 43 years ago on yesterday's date, but....) The weather said it was a 20mph wind, but I know it was stronger than that. On the return trip back to the house, I was hitting 30mph easily. That was a lot of fun! But I earned it with the trip out, no doubt about that. I'm sure my legs got toasted doing that work, and it is a mostly uphill route northward. 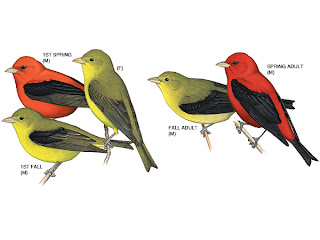 I know some folks will probably think this is goofy, but one of the things I like to do is to spot animals on my rides. Usually these are birds on my gravel rides because wild animals generally stick to the woodlands and grasses. There are not many animals that frequent gravel, although I have seen skunks, woodchucks, muskrats, and deer from time to time on gravel.

So, I generally just see the occasional hawk, Turkey Vultures, and scads of Red Winged Blackbirds. But today I saw something I had never seen before, and after looking it up on the inner-web-o-sphere later, I also identified a tree full of birds I saw while snow shoeing in 2000. (So, technically, I had seen this bird before, but read on.....)

I was riding into the wind, which made this all possible, since the bird had its back to me, and couldn't hear me in the 30mph blast. It was hunkered down on the gravel and looking into the wind, and it didn't take flight until I was right beside it. So, I got an excellent look at it.

It was red. Brilliant red, with black wings and tail. I obviously saw a Scarlet Tanager. Never had seen one before.........that was red!  You see, the female Tanagers are greenish-yellow, and the males turn a similar color in winter. They lose the red color entirely. Well, once when snow shoeing I saw a small tree with several of these odd, greenish-yellow birds in it. Never could figure out what they could have been, until now.

So, while my ride wasn't what I had planned for, I did get a ride in, and I learned something by seeing a bird sitting on the road, and solved a decade old mystery in the process. I thought that made it a pretty special ride. But your mileage may vary.
Posted by Guitar Ted at 1:00 AM

I always have my eyes on the lookout for critters furry and feathered. I think that is all part of the fun of being out on the road or trail?

I've never seen a scarlet tanager up in this neck of the woods.

Thanks man, for breaking the ice. I was always a little reluctant to talk about my bird watchin' Way Out There. And here in Florida we got 'em.

One day while riding some remote gravel I was impressed by how lifelike some guy's Plastic Mailbox Bald Eagle was, then it turned it's head to watch me go by not ten feet away. I guess eagles don't scare that easy. I'll keep an eye out for one of those scarlet tanglers.