Awhile back I wrote my thoughts on the UCI frame certification deal. (See it here). Now there have been some new details that have come to light of late. The biggest new development is a "sliding scale" for the certification process, where the UCI is offering the smaller, custom manufacturers a "discounted" certification price. 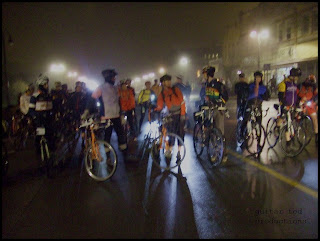 <==These guys don't care if their frames are "certified" by the UCI, nor that T.I.V7 isn't a "worlds qualifier".

The esteemed tech editor and custom frame builder, Leonard Zinn, wrote a very detailed article on Velo News about this recently. He does a great job of showing how the UCI can essentially blackmail the entire industry into its evil plan.

What I found interesting was that the UCI is actually changing some criteria for qualification to race for a rainbow jersey in the Masters class by making "Gran Fondos" UCI qualifiers. Zinn makes the case that the UCI is going to force all manufacturers into the certification process by doing things of this nature, since no manufacturer will want to miss a sale due to not having the bike for a Gran Fondo certified. (Or arguably other future event series) This is a much bigger market than Pro cycling. Zinn says the "money" is what the UCI is after, and the Gran Fondos popularity makes it a potential cash cow for the UCI's frame certification process. Thus the postioning of some Gran Fondos as "qualifiers" to get a Masters Rainbow Jersey.

Well, to my mind, that means the promoters are in on the take as well, since being named a qualifier for Worlds is a big deal. Well, to some riders, anyway.

Zinn calls for a "revolution" of sorts. Asking that the people rise up and take out the UCI. Smacks of John Lennon-esque naivete. "Imagine there's no UCI. I wonder if you can....." Great idea, trouble is, there is no money in it.

The riders want the notoriety of winning a rainbow jersey, and those who know they never will get that prize know that they are in a consistent, decently run organization with relatively fair rules for all  that ride in UCI events. The promoters know these folks will come to their events if the UCI says the event is a "worlds qualifier", and that means money. The manufacturers are willing to make sure they are certified so they don't miss sales because of  the riders  perceptions of UCI events and their "weight" in terms of importance.

Money. Perceptions. Traditions. That is the stuff that this idealistic "revolution" will be up against.

What we need is a bunch of cyclists that just say "Sod it", and will ride their bicycles just for the heck of it. For the challenge. Because it is fun. Not because there might be a muti-colored stripe across a white jersey with the letters "UCI" stylized across it up for grabs. (Not to mention money, and lucrative endorsement contracts). No. Why would anyone ride a bicycle for that?

Hmm. I may need a new road racing bicycle, and the top of my list was Lynskey and Gunnar. I'm sure those 2 brands will be last to be UCI certified!

Trans-Iowa gets a nod in the current issue of Bicycling mag.. A Great Moments in Cycling insert lists - on page 5 - the TRANS IOWA as an example of the "grassroots endurance events popping up everywhere"!! Super Congrats to T. I. !!