Saturday was a pretty dang good day. one of those days you don't want to have end. The weather was top notch, and there was lots of cycling involved, of course. 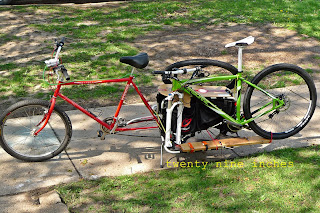 Then it was off to the shop on the Xtracycle to retrieve the Airborne Goblin 29 I have in for testing on Twenty Nine Inches. It took a bit of head scratching to get it on there safely, but it wasn't anything that a board, a ByKyle Simple Strap or two, and some various bungee cords couldn't fix!  A few test bumps to make sure I had everything strapped down tight, and I was off. 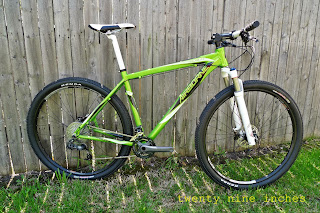 Once I got the Goblin 29 home, I had to take some images of it. So, I spent some time goofing around with the camera. In the meantime, I had my son come out with his bicycle. He wanted to try and ride some. Well, I figured it was time he tried a few new things. First, I had him roll over a three inch diameter branch. Then I took that away, and taught him how to stand and coast. Then I brought back the branch and showed him how to absorb the bump with his legs and arms. He felt the difference, and the lesson was successful.

The women of the house were off shopping, so we had to fend for ourselves for lunch. I took my son on the back of the Xtracycle to get some vittles which we took to a local park and had a picnic with. Then it was back home up some alleyways and finally back home. 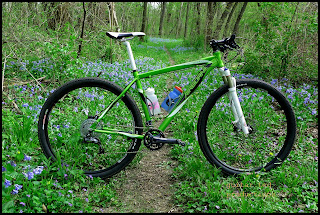 After awhile, the women came home, and I was cleared for a shake down ride on the Goblin. The woods were filled with Bluebells and reminded me of one of my first dates with Mrs. Guitar Ted where I took her for a walk to show her the bluebells and fell head long into a mud puddle! Ah! The memories...... But I digress.

I headed back after a good hour and a half of making sure the bike was working correctly. Then I started up the grill and cooked a mess of meat up while I sipped on a cold Negro Modelo on a fine late spring evening. I looked at the westering sun and thought, "This has been a pretty good day."

Yup! One of those I'd gladly repeat.

The next day was Mother's day, of course, and I visited my Mom and had a great time. Mostly spent the day relaxing. It was another really good day.

Hopefully your weekend went well too.
Posted by Guitar Ted at 1:00 AM