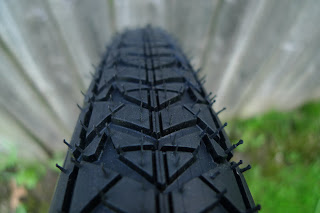 The comments yesterday reminded me of the perennial question that pops up in searches here and on Gravel Grinder News stats: What Tires To Run At The Dirty Kanza 200 ?

Well, this is purely my opinion, and purely speculation on my part, so take this with a grain of salt. I've been in the Dirty Kanza 200 three times, and I've never run a tire narrower than 2.00".

Ya know, I saw something in all three of my attempts, and that was guys having flat tires. Lots of them. I noted something, and that was that most all were predominantly narrower than two inch wide tires, and most skinnier than 45mm. I spoke with guys that had anywhere from three to as many as eight flat tires in 200 miles.

What if you didn't flat at all?

Seems like you'd save more time, and maybe, if you had the right "motor", that would be enough of a margin to win. Maybe.......

But let's face facts- Most folks entering the Dirty Kanza 200, or any gravel ultra, aren't entering to win it. Maybe 1% of the riders have any chance at that. So, how does the wider/narrower tire choice affect these riders? Well, that's obvious, isn't it? I think you all would rather be riding than fixing flats. Maybe. That might be a long shot, but I'm going with it..........

Maybe you'd also like to be comfortable? Have less numb hands? Maybe you'd like it if your bike didn't bounce around so much when you hit the bigger, chunkier stuff?

Maybe you've read tests where bigger tires run at lower pressures actually have less rolling resistance than skinnier tires at higher pressures? Or perhaps you'd like to enhance that even further by running tubeless?

I know that many do not have bicycles that fit bigger than your average cyclocross tire, and I know that a "fat" tire for a 120lb person is one thing, and totally another for a 220lb person, so you have to use some common sense here. There also are not many good, performance oriented, lightweight tires in between 35mm-50mm in width either, so I get it if you don't like your options. But, there are some options if you look hard enough.

In conclusion, I would advise that you may want to reconsider what you thought was a good gravel road tire.
Posted by Guitar Ted at 1:00 AM

What wider tires are available? I've only seen the conti cyclocross in a 40 width that would fit on my tcx.

@tcxjon: Well, Scwalbe makes several Marathon variants, and this is what most folks run. You can dig around and find some others by Maxxis, Specialized, and Bontrager.

But as I mentioned, they are not necessarily going to be ideal choices from a performance standpoint. You'll find mostly wire beads, puncture protection belting/materials, and resulting heavier weights.

That said, I know a fellow that completed Dirty Kanza on cheap Kenda tires he got off a hybrid and had zero flats. He found something that worked by being a bit observant and compromising a bit by using what most would constitute as a non-workable tire.

Perhaps as time goes on and the gravel/adventurer/rough-rider category grows, (and I think it will), more tire companies will see the benefits of doing what they already are doing in Europe here in the U.S. (Read: Trekking tires)These and perhaps even more racing oriented fatties would help fill in the gaps.

I've signed up for the Heck of the North as my first gravel race. At 230lbs, I know I'm not in the running for a win, or podium, or likely the top half of the field. I'll be running my old Trek 930 steel 26er, now rigid with a Surly 1x1 fork. My original plan was to run Racing Ralphs in 2.25 f&r, but looking at the muddy singletrack sections, I've ordered in from Europe a 1.8" Fire XC Pro to get some needed mud clearance in the chainstays.The RR will stay up front. The RR roll great, even on pavement the mtb is nearly as quick as my CX rolling 28mm slicks, I hope the Fire XC Pros roll as well.

I think the gravel/adventure/ rough-rider/off-piste/swiss army athlete is going to become more prevalent.