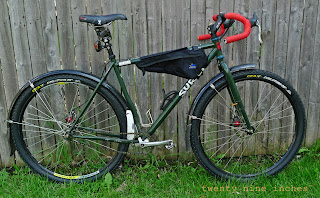 Over the weekend we experienced some radically different weather at different times. It started out Saturday with rain, so instead of riding, I wrenched on some stuff instead. The Karate Monkey was slated to get the new Geax Evolution tires, since it is the most commuter-like bike I own, in my opinion.

It needed to get a wheel swap back to the original wheel set I had on it from 2003. I had some issues sorting the rear brake, but those were overcome and it came out fine. One more thing to do to it, which will be a vast upgrade, and that's swapping out the levers to proper ones meant to pull enough cable on the BB-7 Mountain calipers, which I've never had on this bike. (Proper levers, that is.) That can wait for a bit though. For now, she's street-worthy.

Then I got to doing some work on mounting the Geax Gato tires on my Gordo rims. Now, it is well documented how TNT Geax tires are just about impossible to mount on Stan's rims. Well, you can add Salsa Gordo rims to that list as well. Man! That was a tough tire to mount, and I had to use levers on both beads to get it on there. Mounted up brilliantly, and these shant be blowing off, methinks. (Yes- tubeless) Now with one tire wrestled on, I went to another project for a bit to let my hands get a rest. Then the sun came out. Well, my seven-and-a-half year old was bored, so we took time for a bicycle ride.

He was ready for something a bit more challenging, I figured, so it was off to the neighborhood cemetery. Lots of twisty roads and hills. Not big hills, but not the dead flat sidewalk we have around the block where we live. We had to stop a few times so I could "discuss" the issue of earning your down hills. He seemed to think the whole world should go downhill, or at least that he shouldn't have to ride up. Well, that was not going to fly with me, so a bit of "convincing" had to be done, and well, he got up there. More than once.

On one down hill he yelled at me as he went by, "Here comes your failure!" (You can borrow that for your next race, by the way.) I don't have a clue where that came from, but you might see it pop up on something coming up later. Keep yer eyes peeled. 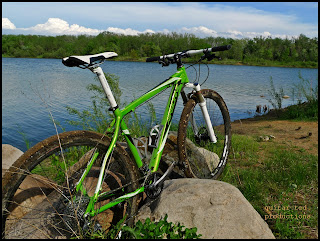 Sunday was looking odd out there for a bit, but it cleared off, and I got a ride in after church and lunch. It was a great ride, and the conditions were still okay, even though we had plenty of rain Saturday and Saturday night late.

The good ol' Green Belt was greasy and fun, with a few hike-a-bikes for water crossings thrown in for good measure. The mosquitoes are still not a problem yet, so a couple of stops were possible without getting buzzed and bitten. That was nice, but I know those days are numbered, as are the days where weeds are not grazing your legs. While the City mowed out there recently, they won't be able to keep the "weeding in" from stopping. (Unless they mow more, which is highly unlikely given the economic climate these days.) Enjoy it while you can!

Good looking Monkey there...how do the drop bars work for you? I still have the 'Torsion Bar' on mine w/Ergon grips and don't see a need to change since I dont commute with mine....later, Mike

Seven and a half! I got a seven and a half year old, also...except he's 25 now. Eighteen years goes by like nothin', man. Enjoy it while you can, indeed!

@MICHAEL: Thanks for the compliments. I have had drop bars on this bike for several years now and love them on it. I also use drop bars on a couple of other mtb's I have.