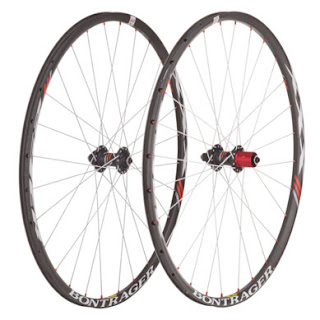 We Are Not Amused: Ya know, sometimes I wonder if the product guys at some of these companies are paying attention to the competition. Case in point: SRAM announces a new mountain bike wheel line called "Rise". Okay.....that's all well and fine.  Here are the details...

Did you notice something missing there? Yeah....no tubelessness out of the box. Really SRAM? I'd expect something more from SRAM myself. No tubeless system at all?

Okay, so let's take a look here. It doesn't take long to figure out that the competition is way down the trail already with regard to product already on the trail. Bontrager, (pictured), and Easton have bomber tubeless systems and all the other stuff in carbon rims at very competitive weights already. And if you really wanted a Stan's system, (which SRAM has said will work with Rise wheels), then why not get the "real thing"? Or how about these American Classic hoops? (Yes- tubeless out of the box.)

One has to wonder if SRAM is paying attention to these things, because their offering isn't looking all that impressive at this point. (For 2 grand, at any rate) Maybe they ride like golden butter and I will be amazed, but.......no tubeless system? Weird. 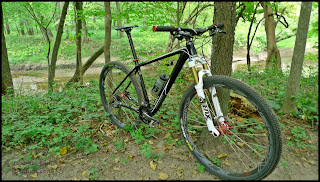 Can You Handle It?

So, this Raleigh Talus 29"er Pro that is on test is going to get some folks befuddled. Whenever I start writing about front end geometry, it happens.

Trail, head angle, and wheel size mixed in with top tube lengths, stem lengths, handle bar widths, and you name it. The minds start shorting out and trying to wrap your head around all of this sometimes makes steam come outta yer ears. But know this: Even our brightest minds can't figure out for sure why bicycles work, so don't feel bad if this handling stuff gets you all upside down when you think about it.

Now I could really blow things up by adding in a statement or two about chain stay lengths!

The thing is, at the end of the day, you ride. If your bike requires something to help it along, most humans can deal with it if they have to. Work it to get around a corner, or just twitch your left hip to go left? Either way, most folks can get accustomed to getting the dance moves right. It is the fact that you don't have to stay with the same partner that gets the mind to roving, and that's where the trouble begins. I guess with my job I could be seen as stirrer of pots to some degree, eh? 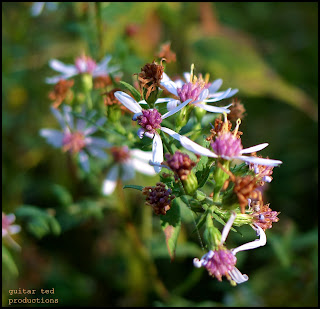 Fall is already ending in some parts of this country, and here, it is about as good as it is ever gonna get for the next six months. If you don't get out and ride this weekend, well then.......you probably blew yer chances.

I have got some riding plans for the weekend and I won't be idle. Hopefully the image taking opportunities will be good too.

I'm still working on figuring out the camera. Funny thing is that many folks take to the things like fish in water, but for some reason I just don't seem to feel the need to go all into RAW, aperture settings, and fiddle with crazy settings that my camera has. I just want to shoot some pics and if some come out, hey....that's great.

I also may be a bit odd in that I really don't want to know that stuff.  I like surprises. If it comes out, or not, I am okay with that. I suppose the digital era brought that on, because obviously, spending a metric ton of money on film and processing wouldn't be too practical if you didn't know what you were doing in the first place.

I just want to get out, hunt down some images, and take em home.   To me it is part of an adventure, and geeking out on the camera part isn't the thing for me. It is for some of my friends though, and that's all good. The main point is about riding bicycles and having fun, for me. The picture taking is just part of that fun.

So, get out and have some fun this weekend and ride your bicycles.