Yesterday it rained. Bleech! But before that, I made a quick run to work on a test bike that needed to be returned and ran back on the Orange Crush. It was all done in a big hurry to avoid getting wet. Then it rained all morning. 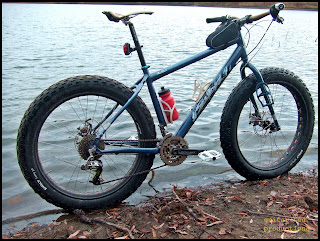 But it started to quit around noon. I started thinking about getting a bike ride in.

Normally, off roading right after a rain is a really bad idea. Rutting, mud, and pedaling through said greasy mud is no fun for me, my bikes, or for trail users. Not that it matters too much, because as I have said many times, the Green Belt gets so flooded out and changed up by Black Hawk Creek that my bicycles nary make a dent in that eco-system. That said, the fat bike tires have far, far less impact. So, I took the Snow Dog out for a ride through there today.

Those big ol' Larry tires were splooshing through the wetter sections and the wet leaves didn't bother the bike at all. I should say though, that the speeds weren't very high yesterday. Just a steady, fun ride to see how the bike handled the trails right after a rain in there.

I wasn't planning on being out for very long, but as I went, I became more interested in trying some new things with the Snow Dog, and ya know, since I have a hub that actually engages without sounding like it's going to blow up now, I have to start widening the scope of possibilities with this particular bike. 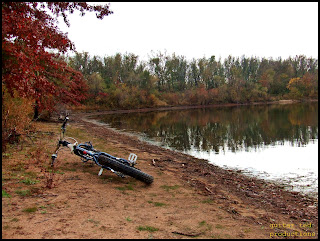 I started out by deciding I should try a little "beach combing". The little smudge of water we have in the Green Belt that makes for a lake has suffered a bit due to the very dry weather we have had of late. The water is now down, and has been down long enough, that the water doesn't lap right up against the steeper bits of the bank, and has exposed a thin, sandy edge to ride on.

Part of what I traversed was covered in dead cedar branches. It looked like flotsam and jetsam from a ship wreck on the sand. The big Larry's snapped and popped the dead wood as I rode over it gingerly, hoping not to impale one of those large pillows of rubber and air. You see, I don't yet have a spare tube for this thing! (That should be coming in any minute now, so that worry will be over.)

I continued around the edges of the lake until low hanging tree branches essentially forced me back up on to the single track proper that surrounds the lake. I found out that the soft, water logged sand and mud were no match for the Snow Dog. It was a lot of fun to be able to ride that fringe around the lake as far as I did. No other bike I have could have done half as well at that. 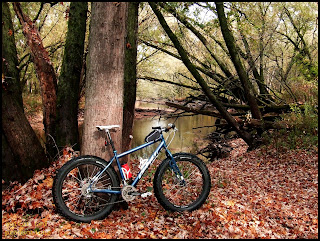 Well, with the lake rounded, I decided to push on to Ridgeway Avenue. On the way there, I ran through some water pooled in the trail here and there, as well as some deep sand.

None of it upset the Snow Dog in the least. I just trundled through on my merry way. I surprised a couple of younger deer, and several squirrels along the route. The squirrels were hustling nuts for winter and next spring's food supply.

The clouds were shredded and blowing on a stiff Southeasterly wind and fits of sunshine would occur from time to time. It was pretty humid from the rain, but a slight tinge of coolness could be caught coming down from the upper atmosphere. A sweet mix of summer and winter. Hints of what was coming, and a goodbye to what had been.

Finally I turned the Snow Dog towards home, keeping to the unpaved areas as much as I could. I was sweaty and tired from the effort once I got back home. A couple of hours out plunking around on the bike doesn't seem like such a big deal, but when you are rolling a 30 plus pound bike, I suppose you must be burning through some calories. I didn't notice it until I got into the house. I was hungry. Really hungry!

The fat bikes get called "snow bikes" and "Pugs" unfairly. These are much more than a snow only design. True, they were designed with that thought foremost in mind. They are excellent at that. However; the fat bike tires are so much fun, so tractable, so forgiving to the terrain, that you can consider paths less traveled, and go there. My other bikes? I would have walked a lot more, gotten the other bikes far more dirty, (the Snow Dog had hardly looked  like it had been in any mud at all), and would have torn up sections where I barely left a mark. Sand? pffft! Mud? Not a problem. Dead falls and trashy undergrowth? Rolls right on over it.

I'm sure glad I have my fat bike. Without it, I wouldn't have gotten an off road ride in at all yesterday.

Not that you needed much convincing, but I'm glad to see that you're discovering that fat bikes are SO MUCH MORE than snow bikes! I've long been convinced of this. More need to be!

What bars are on the Snow Dog?

@Rob: Those are carbon Carnegie's Bars with the raw Kevlar finish layer showing through.

Sounds like a great ride- the kind of off-the-beaten-track exploring that I thought of the first time I saw a Pugsley. it wasn't til later that I read of them as 'snowbikes', and I wondered if I was missing something. It's great to see that they do indeed kick offroad butt all year through. Now, if only I could afford one...