Well, it is that time again. The weekend looms, and my week ending "News and Views' post is on tap here. Check it out... 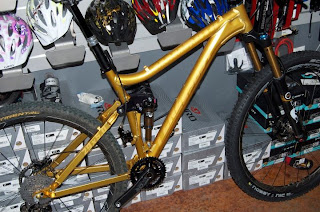 Yesterday I wrote about my friend's idea about the "EveryBike". (See that post here) Well, today you can go to Grannygear's blog and get his take on it.

It was pretty funny, since I had just started writing that post, and Grannygear called me, and asked what I thought about him writing a post about the same subject. (In fact- he'd already written it)

So, anyway, here's another look at that new Lenz Mammoth rig with the 5" travel front and rear set up. I hear it comes in at 27lbs with a dropper post. Not too shabby, I'd say, for a reasonable build. Is it too much? Maybe for me, around here, it would be. However, you could easily have a lot of fun on it here, and go just about anywhere with that bike, not change a thing, and have a capable XC/Trail bike. One bike to rule them all? Almost..... I don't think any bike nerd could ever have just one bike. 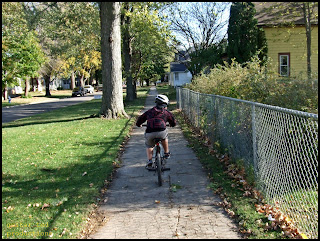 Riding Buddy: My son didn't have school today, so when I got home from work, my riding buddy and I went out for a sidewalk cruise. He is a first year rider, and he's getting the hang of things pretty well, considering he can't just go ride his bike anywhere like I could when I was a kid.

At any rate, I get a kick out of his viewpoint. Like today, he says, "Hey Dad! Are we going uphill here?" (See image) Well, I didn't think we were going "up", but when I paid attention, he was right. It was an incline. He's super sensitive to that. I don't know if that is good or bad, but I find it interesting that he can tell so easily. Heck......I had to actually think about it to know!

The other thing he  does is that he chatters, or at least makes noises, the entire time he's on his bike. Never stops! I guess it's pretty exciting for him. That's good. The final thing I noticed on this particular ride was that he was stoked to ride in a church parking lot. I hadn't realized we hadn't done that yet. The big, wide open space was a sort of freeing feeling for him, I think. No boundaries! We do go down alleys and poke around where cars can't go whenever the situation offers itself up. I think part of riding fun is exploration. I hope my son gets that part about cycling.

Anyway, you all should ride with a youngin'. It is definitely a mind opening experience.

I've got a few "trouble spots" the maps are indicating that will definitely be getting checked out. I may leave the "no-brainer" bits for another weekend, just to give myself some relief. I had thought about a full-on assault to get it done in one shot, but I'm going to roll the dice and hope I get one more decent weekend of weather in here before the snow flys.

Well, I hear some of you will be riding and having fun. Hope ya'all keep the rubber side down and have a good time. I'll be back with T.I.V8 recon pics later.....
Posted by Guitar Ted at 1:30 AM

I feel you with the riding buddy! Since we moved here,back in town,I'm averaging 1-4 times per week (while I'm able to) riding with Nick (my 9 year old son). With apologies and props to ol DeadheadDave,Nick's the best riding buddy I've ever had :)

My riding partner, (my 8 year old son), has opened my eyes to things I've long forgotten!!
It is a good thing!!

Now take him on some buff trails. He'll get even more stoked.

My riding buddies are my twin 4 year old boys. We've been taking them out to the recreation area for some dirt trails once they've transitioned to their pedal bikes. They love it. Yes, they do notice the very slight uphills on their "one speed" bikes. Luckily, my wife is a very skilled rider too as she's my other "riding buddy". Have a fun weekend GT!