Salsa Cycles Fargo model has been a game changer ever since it hit the scene back in 2008. The original 29 inch wheeled "Adventure Bike", the Fargo carved out a new niche in big wheels while it confounded many that didn't (and may still not), "get it".

Based on a design that would not be capable to fit a suspension fork to, and would be designed to be used with drop bars,  the Fargo was unique and caught the imaginations of many.

Then a few things happened up at Salsa Cycles HQ which signaled a change for the Fargo. The Vaya was introduced, which was essentially a skinny tired version of the Fargo at the time. Since the Fargo was so close in design and intentions to the Vaya, and the Vaya had the paved/road side covered, Salsa redrew the lines for the Fargo and colored in a more "dirt-centric" hue for a new version- the Fargo Gen II.

The new version of the Fargo also got a new color- "Cream Scheme", which is a kind of brown-ish bone color with a pearlescent sheen. I went with the Fun Guy Green of the Fargo 3 complete. That is the same color as the Gen I Fargo.

The Gen I Fargo has different graphics, which were a "transitional" style coming off their former pin stripe heavy, Tex-Mex style. The new Fargo features the "wood cut" type graphics which have a love-it-or-hate-it appeal. I'll be honest- When I first saw images of the newer Fargo graphics, I was a bit let down. The Fun Guy green ones were especially not to my liking. However; as is typical with Salsa, (and Surly, All City, or Civia), their images stink on-line and in print. So, I reserved judgement until I could personally see the look up close.

So, what do I think now? Well, I'll say this: These are not as stunning or as visually interesting as the Gen I's, but they also are not nearly as awful as I thought they might be. They are washed out on the green back ground though, and the hues seem a bit odd, but I don't hate them. Weird? Yeah. These graphics don't quite work, but oh well......

So, what else is going on here? Well, for one thing, a major difference is in the geometry. This generation of Fargo will accept a suspension fork, if you want 80mm of travel. I'll admit, there were times on my old Fargo I wanted that suspension fork. I'll likely put one on here at some point. But, for now, this will be a rigid build.

Another difference is the International Standard caliper mounts, as opposed to Gen I's post mounts. As I understand it from Salsa, the manufacturing tolerances for post mounts are really tight, and they were getting too many out of tolerance frames from the factory, so a decision to switch to the much more forgiving IS mounts was made.

Note also how the drop outs and seat stays meet. There is now a little curve there to clearance calipers better.

I like the way it makes a gentle curve and gives the rear section of the new Fargo a different feel from the Gen I frame's straight lines.

I'll likely use 160mm rotors. I have found that they work just fine on the Gen I with the Tektro linear pull compatible drop bar levers and good housing topped off with a detailed set up to the BB-7 Mtn calipers.

Finally, there are still are rack and fender mounts, so the Fargo still will support your adventures with capabilities for racks, fenders, and carrying a load. 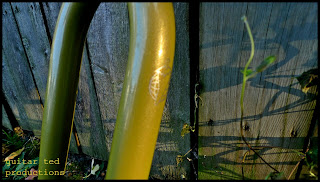 My Fargo build will echo Salsa Cycles "dirt-centric" vision for Gen II and I will be using a mountain triple, a 9 speed drive train, STI levers, a Cane Creek Thudbuster ST, and tubeless tires on disc specific 29"er wheels.

I'm going to stay away from the racks and fenders though. Why? Because Salsa Cycles will be offering a frame bag for the Fargo sometime next spring, and I also will be looking at a big seat pack for this as well. I've been threatening to do a bikepacking adventure for a while now. Maybe I will get on that now!

Gen I Fargo is still going to be here as well, and eventually that will morph into my full on fat tire gravel travel machine. Until these two Fargos get up and running, I'll be busy! When they do, I plan on doing a "Fargo vs Fargo" post, and we'll see where they differ in the ride as well as the spec/geometry. Stay tuned.........
Posted by Guitar Ted at 1:30 AM

I did exactly such a test yesterday! A lap through Wilderness Park on my v1 singlespeed, then a lap on my Ti BWNN. Good stuff... I won't ruin your story though, because it's a good one. They are definitely two different, but similar bikes. It's great to have both in the stable...

What front dérailleur set up are you running? I have always struggled with sti running mtb front ders. I've settled on bar end shifters. My friend makes a shifter mount that I'm trying on my next build. http://www.randognar.com/1/category/bicycle%20design/1.html