I had decided to get out on Saturday and do a long gravel ride. My initial intentions were to get out while it was still dark, but I had a leisurely morning breakfast and decided not to stress myself out trying to get out the door before the Sun came up. I made preparations for upper 30's to mid 40's temperatures, which meant a Craft windfront base layer, Twin Six Team Metal bibs, Pirate Cycling League long sleeved thermal jersey, Twin Six 3/4's pants, and a Twin Six Team Metal windbreaker. On my head I wore a Walz wool cap with ear flaps, and on my hands I wore a pair of Planet Bike Borealis glove/mittens. For footwear I had on a pair of six inch Kona wool socks and some Mavic Drift shoes.

I ended up leaving on my BMC "Orange Crush" rig at about a quarter after 8 and since the wind was forecast to be getting stronger out of the Northwest, I decided to head out on this year's 3GR course. It was cool, but not cold, and I figured I had dressed really well  considering that. You usually do not want to be warm when you start out a ride, but slightly cool. I was stoked and was planning a really long ride beyond the normal 40 of the 3GR route.

The shadows were long and the winds were light as I made the right turn by the parkinglot where we usually met this past year for the regular Saturday morning rides. I almost pulled in to see if anyone was there just out of habit! It felt weird just riding by without stopping to check, but I knew no one was expecting me.

As I turned North, I was greeted by "hero gravel", which is to say that the roads were really smooth, fast, and clear of loose gravel. This happens when the rains come and car traffic pushes the gravel into the dirt and when it dries out, it is faster than pavement, but can be potholed rather badly. One must keep an open eye to that possibility!

I think my friend Jason coined the term "hero gravel" once on one of his Fargo Adventure Rides in Minnesota, but even if that is not the case, I am attributing the term to him. At any rate, I was making good time to start out with and the winds were still fairly light.

I had not been out this way since the last 3GR and I assumed that there would be little corn left in the fields but I found there was still a fair amount of harvesting left to do yet. Combines were in the fields here and there throughout the ride, and alongside the fields of corn there were several fields that had already been ploughed. As I cruised Northward, I felt the urge to drink so I looked down and.......what the......!!!!!

I forgot my water bottles on the counter back at home!

Well, that was a bummer! Now my big ride plans would have to be scrapped. I thought about cutting the ride short, but then I figured since the 3GR route skirted Denver, Iowa, I could make a detour into that town and stop at their rather large convenience store for something. Fortunately I did bring some money! 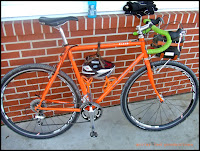 I lumbered into the lot and dismounted. Pulled off my helmet and gloves, then walked inside. You'd have thought an alien being had just landed by the stares I got! I guess bicycling in cold weather is off limits or some such in Denver Iowa. Anyway, I made it to the cooler, grabbed my selections, paid the somewhat flabbergasted checkout clerk, and left before someone decided to make any smart   remarks.

It was just as well too, I was getting chilled from my stop. I drained my first drink selection in the lot there and stowed my other one for later, redressed and mounted up to leave. There is a nice bike lane along the old highway heading out of town that would take me right to the start of Ivanhoe Road, and back on track again. On my way through town I noted one city block with three taverns. Yep! Local rural Iowa economy at work here! Without taverns many Iowa towns would be desolate.

By the time I reached Ivanhoe, the wind had cranked up pretty good. Gusting too. I could feel it pushing me around, so I just throttled it back to a manageable pace and kept riding. It was clear, bright, and sunny, but I wasn't getting any warmer! The wind chill made certain of that. Pedaling got my body, hands, and head warmed right back up, but my feet never really did recover all the way. They were cool to cold the rest of the ride.

I had to stop to get some images of the tires I was running. The Surly Knard 41's are nice tires. My prediction is that these will become a very popular gravel riding choice. Kind of air pressure sensitive though.

Anyway, a bit more headwind to go, then I turned out to the South, still following this year's course for the 3GR. I was thinking about adding in the Western part of last year's 3GR course, which would tack on some extra miles, but not require a stop for more fluids, that I didn't have the funds for now!

I went by the Ingawanis Woodland parking lot and saw one vehicle there. I bet whomever was riding was having a blast. The sun and the trees were brilliant. There were leaves blowing in the wind and fluttering down all over. It was a picture perfect Fall day. However; some clouds were starting to blow in from the Northwest. Puffy white ones, nothing to be concerned about.

The old 3GR course is flat out West and the wind was pushing me along at an advanced rate of speed I wouldn't ordinarily have been able to keep up. It was good. I was making excellent time and I figured on getting back in time for lunch despite my stop in Denver and my earlier stop for images.

I had to stop twice more. Once to drink my final bottle I purchased in Denver and once more for a "nature break". Then I made the entrance back into town and plied the city streets back to my home. I was super grateful for a stunning late Fall ride, albeit a cold one, and made approximately 50 miles in the same amount of time I had been doing 40 in most of the year, thanks in large part to the massive tail wind I enjoyed for half the ride. One thing is for certain, there will not be many more days like this left in the year!
Posted by Guitar Ted at 1:30 AM