In mid-November, the idea of Trans Iowa was hatched. The year was 2004. In the ten years since then there have been many stories and memories. These posts will tell of the most prominent ones to my mind. Maybe I'll even spill the beans on some things you never knew.... 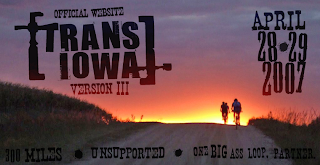 So, what's that saying again? Something along the lines of "Life Happens", or some such? Well, a lot of that happened just before T.I.V3. I guess in a way you could say that the "excrement hit the rotating bladed air moving machine". Whatever it was, it wasn't an ideal situation that led up to T.I.V3. Here are the ingredients to give one a higher stress level experience than necessary.

First there was the whole writing/testing gig for Twenty Nine Inches, which I had been drug into reluctantly the year before. Now I was being asked to attend Sea Otter to help report on things. Yes.....lot's of fun. One week before T.I.V3......not so much fun! This was a great trip though. One where I got to see the California "mid-coast", ride with Gary Fisher, Keith Bontrager, Travis Brown, and others, and had supper cooked for me at Keith Bontrager's home in Santa Cruz. You just don't pass stuff like that up. That was all part of a Trek dealio I got to do just ahead of Sea Otter. Anyway, that was not the best timing coming into an event I was going to have to run myself, (mostly), and keep track of everything going on as well.

Then there was this guy calling me up asking if he could tag along for T.I.V3. Really?!! As if I didn't have enough stuff going on, but in the end, the guy swayed me over, and I agreed as long as it wouldn't be a burden. He said he found out about it from Ira Ryan, and Ira was going to be in T.I.V3, so I figured I should accommodate this guy.

As part of the research this fellow named Zach wanted to do for Trans Iowa, he requested a meeting with me the day before T.I.V3 to go drive the course a bit and for him to interview me. Sheesh! I was going to have to pack that in as well as get the pre-race meeting set up by myself in an upper room lent to me at no charge by T-Bock's in Decorah. Then I'd have to get the pre-race meting done, and hand out, (what I had anticipated would be), 100 or so race bags.

But the icing on the cake- the real kick to the junk- was when I did recon a day or two after getting back from Sea Otter. Jeff had printed all the sheets, and during all of that, he called and e-mailed about several questions he had about my notations. Then he delivered the cues, and promptly left for a race/work trip for Ergon. It would be the last "hands on" task Jeff ever did for a Trans Iowa.

Well, I wasn't hardly ten miles out of Decorah, and the cues were off. Way off. I drove back and forth over that section several times, but I could not make sense of the cues. Dang! That put everything coming after that waaaay outta whack. I would have to reprint 100 sets of cue sheets in four days time, plus work four eight hour shifts at work, plus be a Dad and a husband at home. Nice! This was going to be a miracle if I pulled all of THAT off, or so I was thinking.

I went into "emergency mode" for the entire week. I was up past mid-night every night, and on Thursday evening before T.I.V3 I was having my entire family, Mrs. Guitar Ted, my then six year old daughter, and my then 3 and a half year old son, stuff the race bags with me. Somehow or another, we got it all put together. I was ready to leave Friday morning with a stuffed 90 Honda Civic wagon to head up to start a crazy weekend. As if the previous two weeks weren't enough!

Next Week: The things I remembered from T.I.V3's pre-race meeting and more.....
Posted by Guitar Ted at 1:30 AM