Wednesday was maybe going to be a big, muddy, messy ride. That's why I pulled the Fargo out with its mudguards on and went out to test out these Winter shoes I have to be testing. (Look for more on that later)

Anyway, it was in the mid-30'sF and the Northwest wind was a blowing a bit. Not terrible, or to the point that I felt the branches may break off and smack me when I was in the woods, but it was definitely "there".

I dressed in a wool base layer, a long sleeved poly jersey, and my ever present Endura Stealth II jacket. I wore another Endura product in the 3/4's Humvee pants, and with that I wore some Twin Six wool socks. The head got a Challenge Tires fleece beanie and the hands got a pair of Answer full finger gloves. Oh...and a Bell Super helmet, of course! First pair of footwear was the Fasterkatts by 45NRTH.

So, out the door and over to the Green Belt I went. Once again, I do not advocate riding on muddy trails, but the Green Belt is flood plain, and it gets damaged more from Black Hawk Creek than anything! The all-day rain previous to my ride was surely going to have the trails a mess, or so I thought. Maybe the creek would be up too. However; when I got over there to the creek, I could see it wasn't up much, if at all, and the dirt was tacky. Not messy and muddy like it should have been. 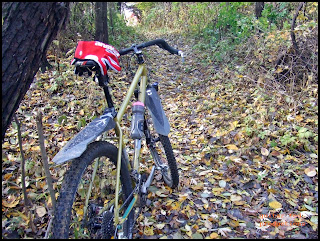 Oh, there were puddles of standing water here and there, and also a greasy spot on occasion, but overall, it appeared as though we'd only had a brief shower, not the all day rain we did have, which should have left more of a mark than it did. I was amazed. Perhaps it is drier than we thought around here. I do know that the Fall was devoid of rain until only recently.

That wasn't going to help me with my Winter boot testing very much! I was hoping for slop, water, and spray so I could ascertain the abilities of both types of footwear I was testing for water resistance and holding up to extreme conditions. I got a little of all three things, but I was hoping for much more. So, I had to take matters into my own hands!

I was planning on looping around the small lake out there and making a sort of "lap" to run both shoes through the same wringer. I decided on arriving at the lake that I would find a suitable place to wade in and see just how well each shoe held out the water. Oh, I didn't go too far in. Just enough to cover my instep.I completed my lap, then back home I switched to the Mavic Drift shoes and did it all over again.

There was one winner and one "also ran", and I got a solid two hours of fun splashing in water and running through what muck I could find out there. I guess I picked up on my "inner boy"tendencies again yesterday!
Posted by Guitar Ted at 1:30 AM