The Last Of The Summer Singletrack Rides

Green. That's all you see in Summer on our single track here in the Mid-West. The single track being the only deviance from the otherwise monochrome cladding of the woods and forest floor during the high Summer months. The days are growing shorter though, and the rains aren't as frequent. The late Summer dry spell has come and went, and now the early signs of Fall's arrival are becoming evident in the woodlands.

Dead leaves. The yellow-brown hues of the leaves that have fallen are in stark contrast with the overarching greenness of the woods. That balance of color will be shifting now at a much more rapid pace. The singletrack will get increasingly harder to see at times. The crunch of leaves under tires will replace the rumble of rubber on dirt. The humid, thick air will be getting taken over by crisp, dry, cool air that will have me reaching for the wool stuff in the clothing pile again. I am ready.

But it isn't Fall yet, and the humidity still says it is Summer. Just not for much longer. I went up to Ingawanis Woodlands for a single track ride on the Singular Buzzard with the MRP Stage fork on the front of it. Although the Buzzard is probably thought of as more of a severe terrain, mountain going sled, I have found that it can scoot along just fine- thank you very much- around the twisty-turny single track and that it gets up the short, punchy climbs without any fuss as well. Recent rains had made the dirt tacky, and the wide, aggressive On One Chunky Monkey and Smorgasbord tires were digging right in. That's good and helped along by the Velocity Dually rims, no doubt. I love the wheels and tires on this bike. Yes.......they are tubeless. I've never run tubes with this set up and never would consider it.

The ride started out fast and furious with the near perfect traction and zippy handling of the Buzzard motivating me to keep pedaling. Then I ran into another sign of Fall- nettles! They are hanging out there waiting to snag you, your clothes, and anything those little ultra-Velcro-like seeds can get their tentacles into. Bah! 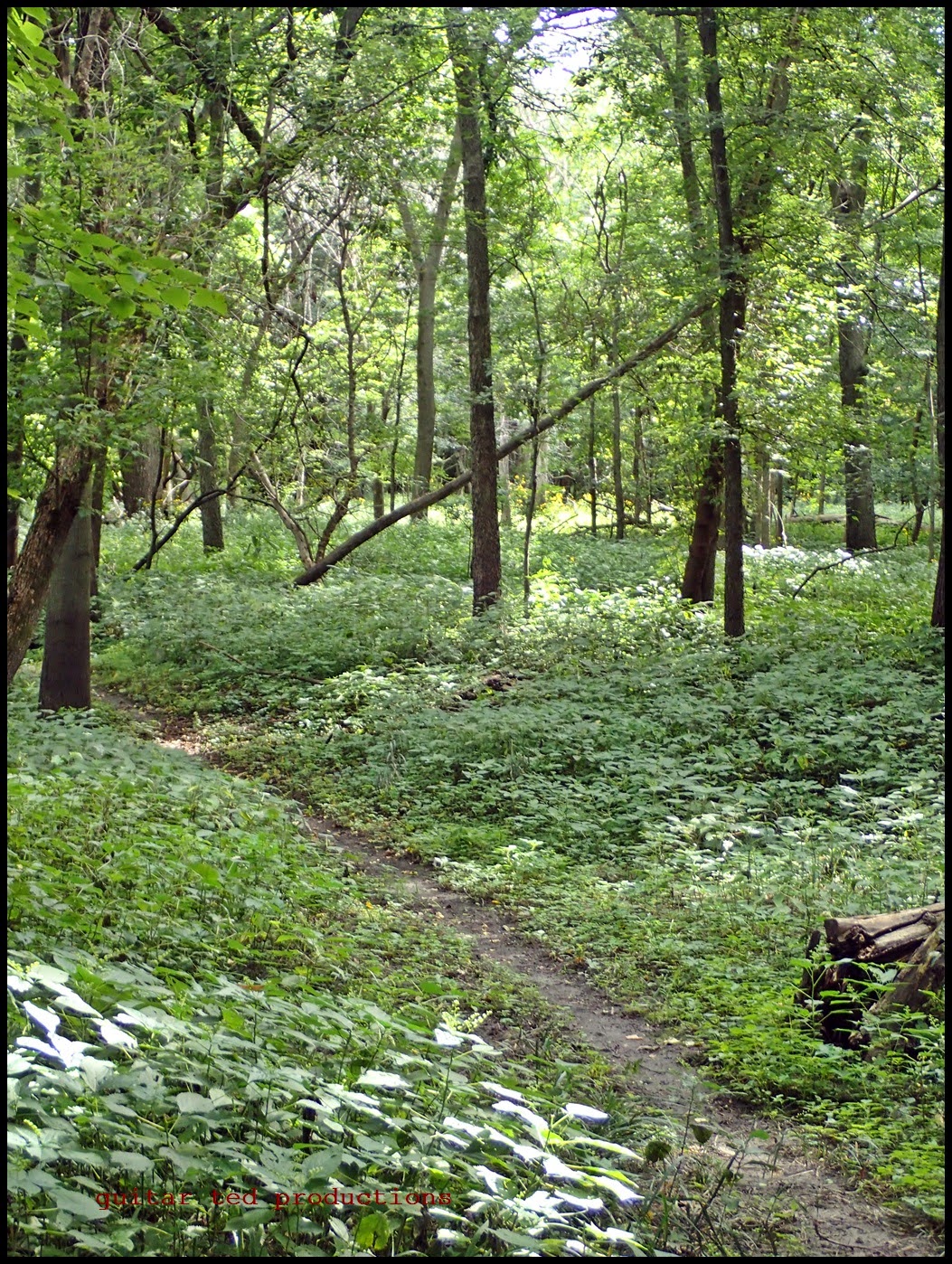 After zipping along a bit post nettles extraction, I decided I needed to stop and see if the Eagles were out and about. I cruised on over to the bottoms, where the trail draws nearest to the Cedar River, dismounted, and walked about 30 yards to the shore where I found a nice bit of late Summer flowers and a great perch of dead wood from a fallen tree branch to sit on. Okay, why not? I stayed about 15-20 minutes, just watching Nature.

The bees were busy. Different kinds of bees too. It is a good thing to see that. It reminded me that the season is getting on and gathering and storing that the creatures are doing now is for the coming cold. I looked out over the calm Cedar River as it flowed downstream, and suddenly a Bald Eagle was spotted, flying upstream, lower than the tree tops, and I tried to get a shot of it.

I sat there a while longer, admiring the flowers, and then I decided I'd better get a move on. I also decided that I was going to enjoy the rest of the ride more. Not going hell bent for leather. While that is fun, and I like to rip some single track, I also enjoy the times that I get to slow down and relax in Nature. There are all kinds of things vying for our attention these days, but there simply are not enough times to slow the heck down and take in some quiet time. I decided that yesterday's ride was "that time" to take it down a notch. It wasn't like I was lollygagging along, but I didn't bury my head down into the stem and gas it every inch of the way either. 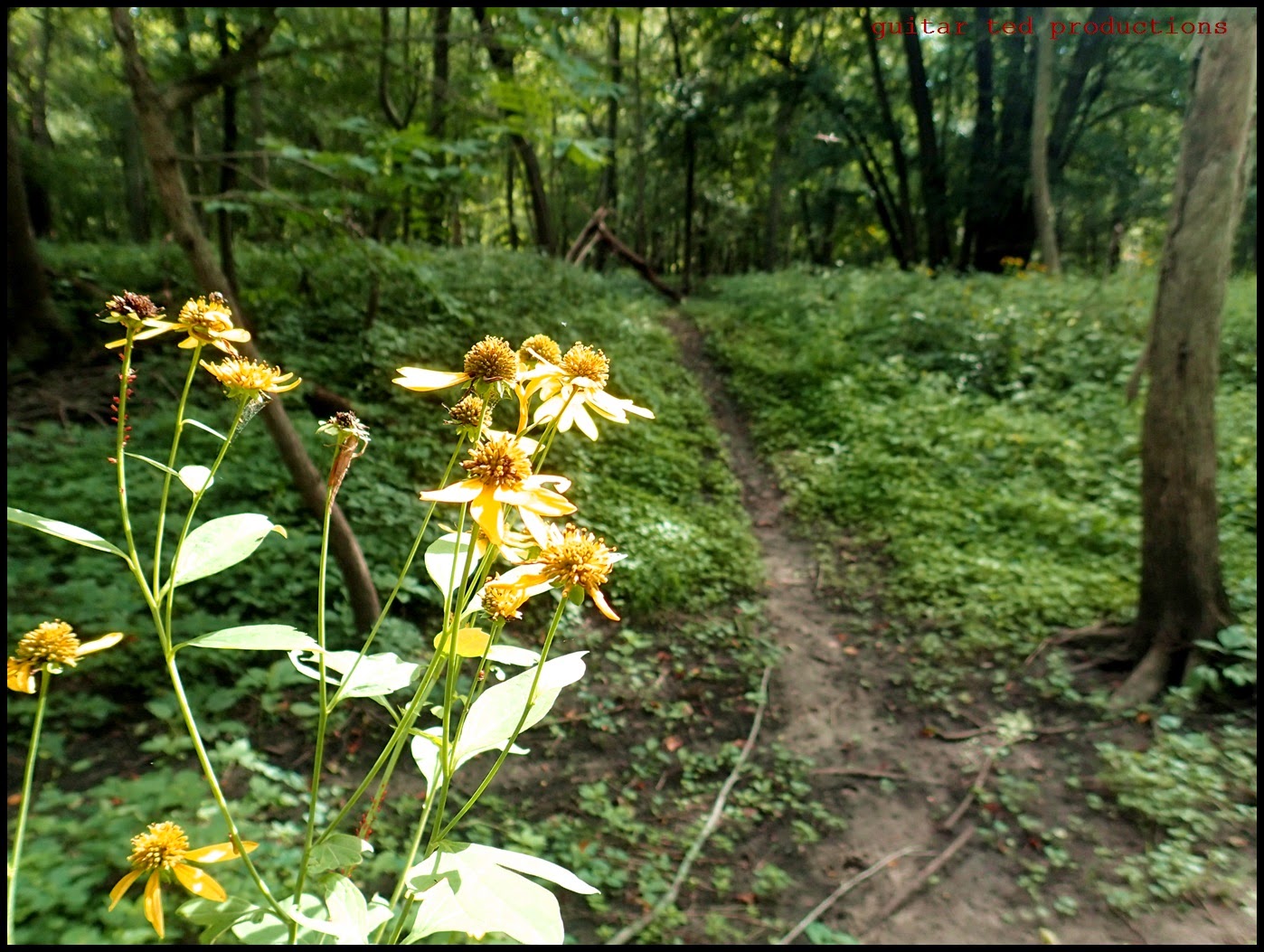 It was a fine morning ride, and I couldn't have asked for a better day, trail conditions, or bike. Everything just clicked into place, and when it was all done, I packed up the bike stuff, threw on my street shoes, and started the drive home. I was satisfied with the ride for sure, but then I got a phone call that made me excited about the future.

Fall is coming and change is part of the cycle of life. There will be more things changing than just the seasons around here though, and as far as I am concerned, it is for the better. In fact, I bet there are things I don't even know about yet that will be adding themselves to the list of changes coming up. I can feel it. Like a cool, crisp breeze in the tail end of Summer.

I cannot say exactly what is coming yet, but as time goes on, more details will work themselves out, more ideas, more discussions, and more plans will be laid. I am stoked to move into this new thing, and also- I am stoked to see Fall coming on. It's the best time to be out in the woods on a bicycle, ya know?
Posted by Guitar Ted at 1:30 AM