It rained quite a bit here on Friday, so I knew that any off roading would be done on the fat bike and that in the Green Belt, since I didn't want to tear up anybody's trail work. The Green Belt doesn't care, and the trail work, (if you can call what the Parks Department does in there "trail work") is basically trail work by barbarism. They essentially run an end loader through the woods and scrape and push anything that gets in the way out of the path. It's ruined what once was a winding single track path through there. Most folks that have been riding the Green Belt for only the past five years wouldn't know any better, but 20 years ago it was a much different ride through the woods on true single track. No more.......

I guess I should be happy I can ride through it at all, but I also feel that this could be a much more inviting trail than what it has been made into now. Obviously, it is much easier and cheaper to just run the end loader through, and anything else would cost more labor and expense in equipment for a city already strapped for cash. It is what it is.

Anyway, the ride..... I used the Snow Dog for mud duty. Does that make it the Mud Dog? I probably could have made an excellent case for the name change yesterday. Mud was slinging up into the air like cow dung off a manure spreader. (Non-farming types won't get that one, will they?) So much sticky black earth and sand. Good thing the drive train parts on the Snow dog are mostly worn out! If they had been newish I wouldn't have been too stoked about what they went through yesterday. It was particularly nasty there for much of the mid-section of my ride.

The plan was to hit up most every trail on the Green Belt. The main trail hugs the Black Hawk Creek, but if you know where to turn off, there are a few diversions that the City has deigned to plow through with its big implement so we can all get through there. I wasn't on a quest to ride absolutely everything, although I probably rode 80% of it all, but as it was, it took about 2.5 hours. Granted, on a fat bike and going at a slower, measured pace due to much sand and mud, so on a good day with a 29"er, I probably could have ridden everything in 2.5 hours.

Going off on a rabbit chase down a dead end bandit trail didn't help, but a little bushwhacking is never a bad idea. In fact, I ran across three deer- two does and a fawn- that I had one of my "stare down" contests with. I'll explain.....

Many times when I see a deer I will stop and freeze. I won't move a muscle. Deer have a hard time actually seeing you if you do not move at all. They can still smell you, and they can see something, I think, but they cannot figure you out if you do not move. It kind of drives them nuts after a few minutes. One of the does today, for instance, started stamping, and then snorting. The other one, which seemed less agitated and was moving a bit more calmly, snorted and made an awful noise at one point. A vocalization of some sort. Finally, after at least 10 minutes, (and this whole time I am standing dead still), the two does figure that they cannot stick around anymore and the bolt off. Meanwhile, as the stare down was in progress, a fawn emerged. Being a young one, it wasn't versed in the deer ways, I suppose, since it stood there and watched me from a distance. When the two does left, it stood there blinking at me. I started moving and reached for my camera, but the fawn didn't scare off, and in fact, I had to wait a good five minutes more for it to finally saunter off in search of its mother. 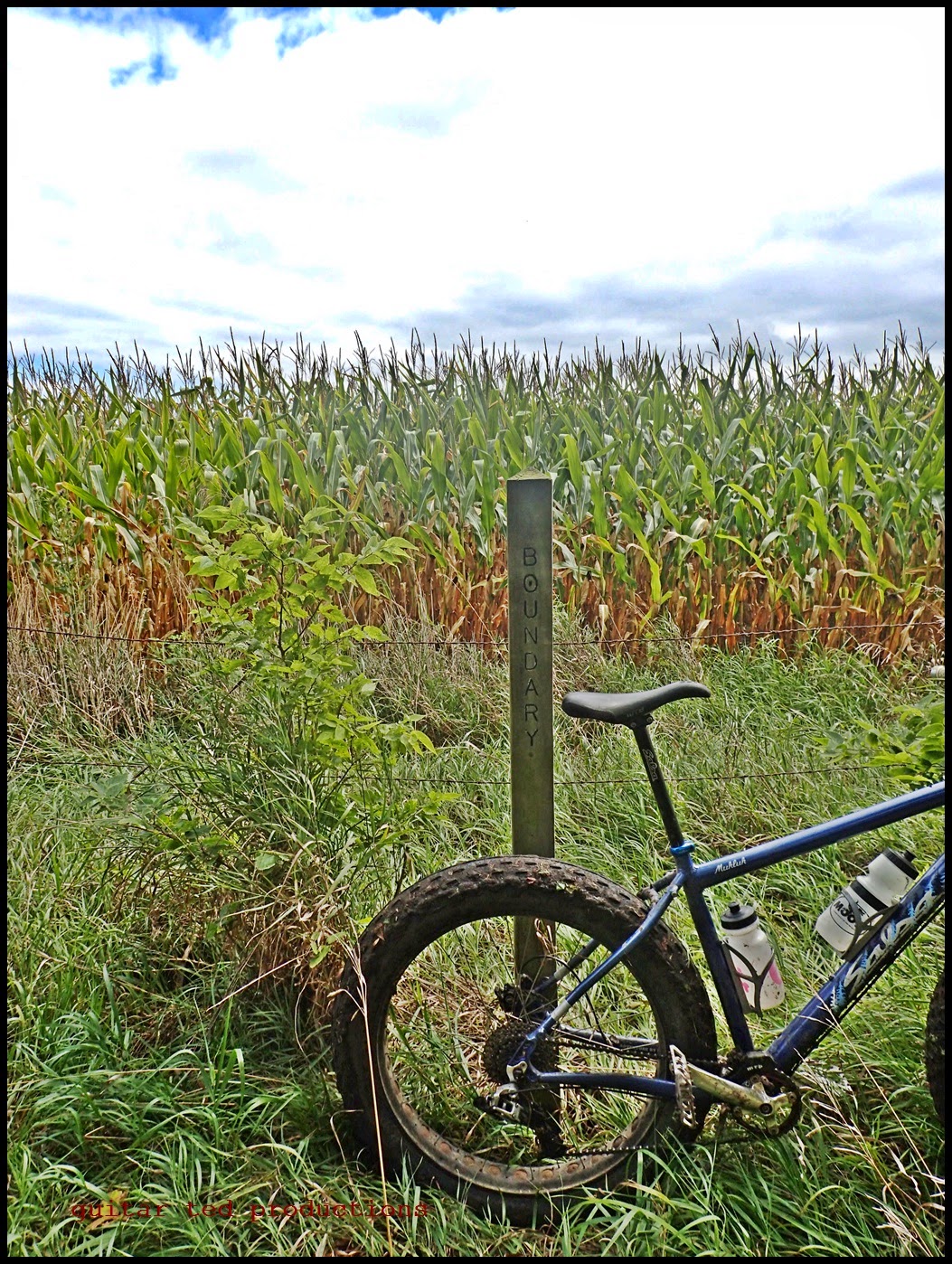 After the deer encounter I saw another red fox scampering into a fence row, (I had seen one straight away at the beginning of my ride as well), and I saw another young doe. Two grass snakes as well, sunning themselves out on the trail in two different locations. A banner day for wildlife in the Green Belt. Usually I don't see much of anything but an occasional deer in this area. That was fun to have experienced. I suppose the fact that there had been no other human traffic out before myself after the rains didn't hurt that from happening at all!

The Snow Dog's poor drive train bits were getting hammered, and by mid-ride I had to be careful not to put too much pressure on the pedals or I could get the chain ring to skip. So it was "spin-spin-spin" and keep the momentum up as much as possible. Fortunately the back third of the ride was not so sticky-gooey and the drive train behaved itself for the most part. That said, I have to switch out parts now. It will make cleaning the bike up easier with all the bits pulled off it. I have need to look at the bright side!

It was an excellent day out and I got in some great, steady miles on the fat bike. This will be good for getting me back up to speed on fitness and working up to being back on the game for Triple D in January. Yes......I believe I'll be pulling the trigger on that again. More on that in the coming months. But until then, I have some work to do if I am going to get back in shape again. Plus I have the Geezer Ride and Trans Iowa V11 to get figured out. Much to be done, and the year is running out. But all that aside, I had a great day on my first fat bike. I still really like that thing even though it isn't all the "latest and greatest" stuff, or some whiz-bang frame design in carbon fiber.  I'll just upgrade that thing and keep on truckin'.
Posted by Guitar Ted at 1:30 AM