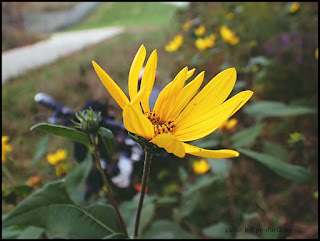 I've said it before, and I probably will say it again many times here. I like flowers. This year, 2016, has been an amazing year for wild flowers. The ditches exploded in Spring with various colors and were pretty good up until about a month ago. Then the flowers in the country started petering out. You have to really look hard to find them now, but there are still a few here and there.

I have a commute route that goes through an old industrial area and part of an ancient residential area where random flowers have been growing for years. Some are vestiges of people's old back yards while others have been brought in by the natural cycle of things. Over the last 13 plus years of commuting through the area, I have noted several different types of flowers come in and now the flower party lasts almost all year long. This is past mid-October, and I took the image here yesterday on my way home. Things get started in late March or early April, so we get about seven months of color. That's pretty awesome for this latitude.

That said, the end is nigh. We've had one "soft freeze" already, but the hard freezes are coming soon, and the flowers will cease to be a happy reminder of life. Dead brown and sullen rust colors will be all that is left behind until the first snow fall mercifully covers the deadness in a brilliant blanket of white.

Shorter days, brown, sullen landscapes, and cold Northwesterlies are coming soon. It will get harder to get motivated to don all the gear necessary to make a ride happen in sub-freezing temperatures. But with that said, I ain't staying inside. That's a death worse than not having flowers to grace the land for five months.

Good good attitude. The best way to deal with winter is to embrace it with a positive attitude. I can't wait to ride my fat bike on the snow.