As many of you know, I have installed the SRAM NX-1 drive train and shifter on my Ti Mukluk. Recently it was flogged on my 100 mile Fat Bike Century ride on gravel roads. This is not a "final verdict" on these parts as I still want to see how the group fares through a Winter's worth of use, but this is a first impression of the group and how it performs for me.

I did do a few shorter rides to break in and fine tune the system before I did my century ride. It didn't take much, since there is only one derailleur, to get tuned into primo performance status. There is a barrel adjuster located at the exit point of the cable from the shifter pod, so adjusting this derailleur on the fly is possible as well, should you need to do that.

The conditions on the ride varied from wet, gritty gravel to dry and pretty dusty. So this was a good test of the system in those specific adverse conditions. There was a tiny bit of rough single track at the very end of the ride so I did get a taste of how stable the system is as well, but otherwise it was all gravel roads with a tiny bit of pavement thrown in.

Shifting Performance: I used a non-SRAM chain on this build because I do not trust the longevity of a SRAM 10 or 11 speed chain versus the competition. That said, I saw no compromise in shifting performance versus 1 x 11 systems using SRAM chains I have worked on at the shop. Other than this, the system was all SRAM with the Surly, SRAM approved X-Sync stainless steel chain ring. I've used a higher end SRAM 1X11 system before and this NX stuff is not as fast, nor as crisp shifting in the field as the upper end 1X11 SRAM components. That said, it isn't bad. Just not super snappy or fast. It gets the shifts though, and so if you are not racing, this is still a worthy system. Oh......and far less expensive.

Under pressure the NX-1 still shifts but the slower nature of the system is amplified over the higher end stuff which still will snap off the shift with a high pitched zing! sound from the chain. This NX stuff doesn't do that, and it is obvious that the shift is a bit laborious. I believe it is because the NX derailleur is not as stiff as the higher end XX-1 and the like. The shifter is really smooth, by the way. The trigger action is easy to initiate and is typical SRAM in an ergonomic sense. Whether that is good or bad is a personal preference issue.

Drive Train Stability: While this doesn't cover uses such as rough, rocky single track, or big jumps and moves, I can say that the drive train seems quite stable. As stated, I did have some bumpy single track near the end of my ride and there was nothing negative to report concerning the drive train. So for now, all I can say is that it doesn't seem as though chain drops will be an issue.

I will say that the chain line seems biased toward the higher/smaller cog side of the cassette more. Getting up into the lower gears puts the chain at more of a severe angle, and the lowest two cogs show significantly slower shifting as a result. I blame this on the OD crank set and its offset chain ring mounting scheme in combination with the longer bottom bracket of the Mukluk. Surly says the inner ring mounting position of the OD crank is supposed to be where the middle ring would be on a triple, but it clearly is not lined up with the middle of the NX-1 cassette.

Gearing Range: Everyone is going to have different needs concerning the gearing range of a 1X11 set up, so this is strictly my opinion based upon my experience and needs. That said, there may be some kernels of knowledge here that you could use.

Clearly, I think it can be agreed that I am not going to be doing big gravel miles a lot with this bike. Maybe I won't ever again, since that is not what I have this bike for. The point is, I could do a gravel century with this gearing set up, and I did. Yes- I was in the smallest four or five cogs almost all day. I did reach into some of those big daddy cogs on the cassette when we traversed the Iowa River Valley, but that was it for low gearing needs.

Now this brings up a simple point. Say that I had the "proper" SRAM NX crank or lets say I had an X-1 type with the removable spider. I could swap rings for a ride like the Fat Bike Century or for an appropriate low cog for a trail breaking fat bike ride. That would "only" require some mechanical work when I wanted to switch up. But......

Again, taking a look at this from a different perspective, let's say that the 1X system existed first. There were no front derailleurs ever before this. Then some whiz-bang company comes up with this idea to mount two rings on a crank set and a chain moving mechanism so you could have a choice. Yeah! Now I don't have to chose a ring before a ride, or be caught out on a ride where I wished I had a bigger or smaller cog for a certain section. Now, wouldn't that be an advantage?

So, 1X may be the latest fashion darling of the media and SRAM in particular, but that front derailleur idea is far from dead folks. Furthermore, it is, hands down, a better idea for many. Had I been running the former 2X10 set up I had before, in proper tuned up shape, it would have made for a smarter choice for the Fat Bike Century. 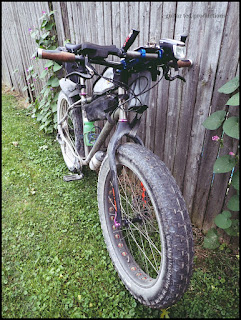 Conclusions: The NX-1 is simpler than a triple to figure out and likely lighter than many double ring set ups. It shifts reasonably well, but it is nothing like the upper end SRAM offerings in 1X11 or 1X12 when it comes to precision and speed. I don't know about longevity yet, but these cogs are stamped steel and the main drive ring is stainless steel, so I am hoping for a Winter's worth of use out of it at the least.

When it comes to details the NX-1 is perhaps a bit suspect. The chain line is going to be compromised more at the extremes due to the larger rear cogs and that even if you get the drive ring in line with the cassette's center cog. The drive ring is going to be a compromise in terms of range and where you end up on the cassette. With a double or triple you can use the Keith Bontrager Rules for shifting and eek out the best possible combination for efficiency and shifting performance. However; that means the rider would have to actually think and use the equipment with skill.

Maybe that's asking too much in these days of ADD folks and innergoogles gaming. Anyway.......

I think NX-1 is the more reasonable choice for 1X11 since you do not have to get a different cassette driver than you already may have, nor is it prohibitively expensive to buy and maintain. Plus, with Shimano doing 1X11 cassettes with wider gearing ranges, the possibility exists to get into a better quality cassette and likely better shifting performance. Basically, there is an upgrade path that doesn't require a new rear free hub and/or a rear wheel. Obviously, a new rear derailleur upgrade path can be had as well. So, for starting out in the 1X11 world, I think NX-1 is really a great option. Just know that if you get into higher end componentry, you will probably not want to return to NX-1 again.

I'll have a long term update on these parts most likely at the end of this coming Winter.

Note- I bought the NX-1 cassette, shifter, and rear derailleur with my own damn money, and that goes for the Surly drive ring and the chain as well. I was not paid nor bribed for this post. So there.......
Posted by Guitar Ted at 1:30 AM

GT, I like that "dice" cable end! Did you make it or is that something that's available? Thanks for your impressions.

@S Sprague: Old, old chi-chi stuff from the '90's. You'd have to make your own nowadays.

110% agree with the whole 1X craze, I have that setup on my Bucksaw and for a pure single track machine it works fine but both my Farley and Pugsley have 2X drive trains and I wouldn't trade them for the world, it's nice to have those extra gears when you need them.

Thanks GT! I'm now inspired to make my own!

I am with you both on the 1X craze too. I run 1x on two of my bikes and would like a wider range on both. After putting on some 27.5+ wheels on one, a little lower gearing would be nicer to spin and for riding in our Sierra Nevada mountains. On the other bike, I was thinking of going to a 3x5 to get some range with my modified cassette on a one speed hub. Since I have the parts I thought it would be fun to see how it feels.

I wonder how that compares to GX? I have GX on my Farley and love it. I have tried XX1, and would be hard pressed to find any difference blind folded.

I have also been very impressed with my GX 1x11 system. Shifting is crisp and the system is very durable. It has barely even needed any adjustment at all in 6mos. And still a reasonably priced group.

@50voltphantom,
You're my hero! Thanks for the link!