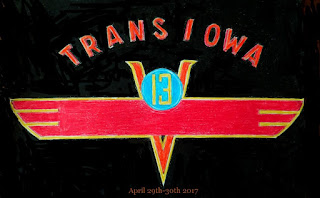 Okay- I figured since the registration is underway for T.I.v13 I would give a bit of an update on how all of that is going so far.

So, anyway, yeah....... eight of the "Plus Six" and Winners have taken spots which could add up to 25 total. The way it is going, I don't think that is going to happen. The window for that category closes this weekend. We'll see if I get any last minute takers. I suppose there may be a few, but usually these come on the front end and then they peter out in terms of numbers. I am thinking I'll have about 10-14 spots to add to the 55 total for the Veteran's Lottery draw.

The Veteran's registration started this week, and so far I have one card that has made it here, but that window doesn't close for over a week, and I am thinking a bunch of cards are going to show up in the next three days and beyond. I am scanning them over for the proper required information and if they pass, I will post them on a separate page which can be found on the Trans Iowa site called "Veteran's Lottery Page". All cards that will end up in the lottery for the Vets will get the names listed there so you'll be able to see if your card made it in or not. NOTE: If your card gets sent in, and your name doesn't show up, well- you got something wrong. I'm not going to spend the time to tell you what that is. Could you send another card? Yeah.......I suppose you could try that, but why not get it right the first time? Usually folks screw up on penmanship, but sometimes they get other things completely screwed up too. Usually it is penmanship. So, do what you have to do to make it readable folks. It isn't that hard.

When the Rookie thing happens I'll do a similar page for that.

Now on to other stuff like the course! I have been working on the course for a long time and now the time is coming up that I will be actually going out to check on it all. That will happen October 15th. That will be a long stinkin' day in the "Truck With No Name", and there will be a report afterward. I have gotten some secret spy reports on some of the roads already from my agents in the field, so I hope to make the recon in a day. We will see......
Posted by Guitar Ted at 1:30 AM