Every Sunday for the last several months, (with the exception of last Sunday), I have been re-posting stories from my original series, "Touring Tuesdays", which ran in 2008-2009. In these re-postings I have been adding imagery where it makes sense and tagging the ends of each post with additional remembrances and information. The series for the first tour, the "Beg, Borrow, and Bastard" Tour", will end this Sunday.

I've gotten some feedback on the re-posts which has been positive and has encouraged me to continue on with re-posting the second tour's stories, which I had dubbed "The Race Against Death Tour". The interim time between tours, (they happened a year apart from each other), is also documented and I will be re-posting that material and will likely be expounding a bit more on that. If you thought you knew Guitar Ted, you will want to check that out. There are some surprises in this part of the story.

So, if you enjoyed those stories and want more, tune in this Sunday for the final "Beg, Borrow, and Bastard" tour post called "In A Blazer Of Glory". Then hang on for the continuing story coming out every Sunday after that. 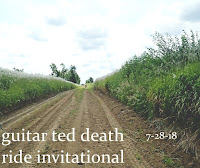 Of course, tomorrow morning in Reinbeck, Iowa, the 13th Guitar Ted Death Ride Invitational gravel grinder group ride is going to happen starting at 6:00am. The weather looks cool, maybe a shower later in the day, but actually pretty decent as late July weather can be pretty brutal.

I have about 8 guys committed via e-mail and comment that are supposed to be showing up. We may get a few to several more that just show up. There generally are a few "surprise" folks that just show up and ride. That will be fun to see if it happens again this year. Last year it was Kevin Fox who drove all night from Omaha, Nebraska to come and join us.

So, I was asked a couple nights ago, "Why do you call it the Guitar Ted Death Ride Invitational?" That's maybe a question you may have pondered, so here ya go.......

From February 1997 until September of 2002 I worked as a car mechanic. During that time I routinely put in 10-11 hour days and got maybe 20 minutes of break time split into two segments during a day. The rest of the time I was working hard! This place was busy and the work was the most physically demanding I have done. Therefore; there wasn't much physical energy left for anything afterward, especially cycling. I would go weeks at a pop without touching a bike.

So, once a year, during a slower weekend in Summer, I would take a Saturday off and get on my road bike, (Yes! I actually owned road bikes then!), and I would ride county blacktops all day, solo, until I bonked spectacularly. I didn't really have a handle on nutrition for long rides yet then. Anyway, I would come home looking like a rat that had been drug through a knothole and thus these rides became to be called "death rides".

Look for a detailed report on the GTDRI Monday.

That's all I have for this week. Enjoy your weekend and I hope that you all get to ride your favorite bikes this weekend, whatever those might be.
Posted by Guitar Ted at 1:30 AM