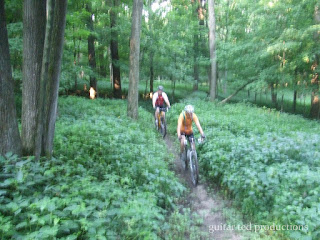 Ten years ago on the blog here I was getting the message out that 29"ers weren't a fad anymore, and that RAGBRAI was being affected by technology where folks were bailing on the ride due to the instantaneous availability of weather forecasts. Weather apps were in their infancy, but smart phones were just hitting the scene and notifications were becoming a thing.

But as for me, there were two things about the end of the month ten years ago that stood out for me. One was that I rode again on the South side of Ingawanis for the second time ever. Yep! It was 2008 when the trails back there finally got attention and were "properly" cleared. If you look at the image here, you'll note that "cleared" then meant a completely different thing than it does now. Anyway, the point is that this was a mark in time where riding the South side started to take over riding the North side, for all of us, and now we don't ever ride the North side, which was unthinkable ten years ago.

The second thing was that I notice that a LOT of my images are broken and don't show up now. For you that sucks. To me it marks the beginning of the end of "phase one" of my blogging career, such as it is. Promises made by Mr. Grahl, then owner/proprietor of the "Crooked Cog Network", started to be broken. By the end of the year it was painfully clear that there was going to be a huge sea change in the situation I had found myself in. But that tale will unravel here as the weeks unfold.....
Posted by Guitar Ted at 1:30 AM