Ten years ago on the blog I was talking about how a 29"er had won a World Cup XC MTB race for the first time. That was a big, big deal back then. No one was giving the big wheels a chance to be anything but a circus side show and certainly not a serious platform for racing of any kind.

Then I also penned a post about technologies 29"ers needed to adopt ASAP. Things like tubeless tires and rims, preferably a systemic approach. I also talked about how 29"ers need tapered steer tubes and through axles. Oddly enough it was the through axles that took the longest to take hold.

I rode Cedar Bend Park North of Waverly for the first time on my OS Bikes Blackbuck. That bike became a regular on the blog from then on for several years. I haven't trotted it out a whole bunch of late, but it still abides in the stable here. Probably my favorite configuration of this bike ever is seen here. Titec H-Bar with a longer than acceptable today purple anodized stem. Salsa Gordo rims with wide-ish tires. I should get a new H-Bar and a stem the same length as that old purple one and set the Blackbuck up like this again. I still have the rims and red Hope hubs but the free hub is roasted. I probably should relace to a single speed specific one. 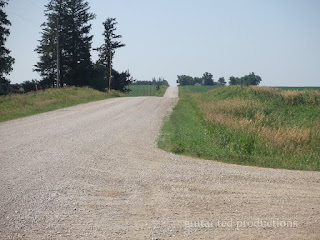 The other thing that was going on ten years ago was recon for the third Guitar Ted Death Ride Invitational. This one was run from Hickory Hills and was mostly in Tama County. It was a 100 mile course and it was a good time, but I;ll get to that later.

This GTDRI was a really big deal for another reason. I knew by this time that Jason Boucher was to show up for the event. He had a project that was coming to fruition that he wanted to ride in the event. Salsa Cycles was his ship to steer back then and he and the team were about to unleash something new on the world and the GTDRI would be its first public outing. Well.......not 100%. While we got to see and touch the bike, we couldn't know its name yet.

It was an interesting situation, and to boot, we weren't even allowed to take any images of this bike. Like I said, we will get into all of this very soon, as the 2008 GTDRI happened in mid-July. I think I was planning on running my drop bar Badger custom bike, but as we shall see, some part failure action dampened my confidence in the bike and I am pretty sure I didn't use it.

The amount of backsweep(45*) of a titec/Jones bars shortens the “effective” stem length compared to a straighter bar, does it not?

@Skidmark- Well.......it depends. On a bike with a more "old school" top tube/front center set up, I would tend to agree. The front centers are already short-ish and the back sweep of a Jones Bar can make that too short. However, on today's longer front centers, it may actually not require a longer stem.

That's because a Jones Bar promotes more forward and more behind the steer tube positions which are great for many reasons. It's why you get a Jones bar to begin with. For instance, my Blackborrow DS, a fat bike based more upon modern trail geometry, I didn't switch out the stock stem.

Perhaps on a bike with a 35mm stem? Maybe. I don't think there is any "hard and fast" rule though regarding stems on bikes switching to Jones Bars.