It was pointed out to me by a friend on social media yesterday that the Iowa Department of Transportation's Long Range Plan for Bicycling and Pedestrians had a thinly veiled nod to Trans Iowa in it. Here is the particular paragraph in which TI was hinted at:

Unpaved road network
– Iowa has an extensive network of unpaved roads—gravel or earthen—totaling approximately 73,000 miles across the state. Many of these roads are classified as “Level B” roads by the counties, which mean they receive a very low level of maintenance and are used on an “at your own risk” basis. Iowa’s unpaved road network provides an opportunity for gravel road bicycling, a small yet growing form of bicycle riding and racing. This sport could encourage and support tourism and related economic development opportunities. A number of gravel road races and rides have occurred over the last few years and many have originated in Grinnell, which has become the de facto center of gravel road bicycling in Iowa.

So, that was kind of neat. Trans Iowa, and Guitar Ted have been subjects of books, an Emmy winning documentary, has been mentioned by news and periodicals, and has been the cover story on a couple of well known cycling publications. Now it is (kind of) a part of a government report! But all that aside, I just hope that gravel cycling in Iowa stays strong and gets even more popular.

Bad Weather Tornadoes are a thing here in the Mid-West and you never know when, or if, you will be next in line to get hit. Thursday was a particulary bad day as tornadoes swept through central Iowa hitting the towns of Marshalltown, Pella, and Bondurant, Iowa along with several sightings of funnel clouds elsewhere.

What is crazy about yesterday's storms is that they destroyed some significant businesses and damaged some important buildings. The famous historic Marshall County Courthouse got damaged, the big Pella manufacturing business, Vermeer was heavily damaged. Marshalltown's hospital was disabled and all patients had to be transferred. Another big manufacturing plant in Marshalltown was also heavily damaged. Tornadoes are very random, so having so many important structures damaged is very odd indeed.

My thoughts are with all those affected. 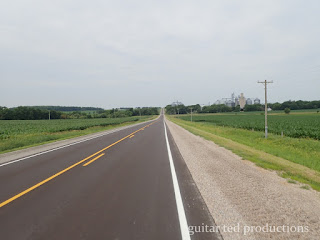 Feedback From " Streets of Danger"-

The post the other day about how our media covers the issues surrounding cyclists safety and all brought a lot of sympathetic comments to the issue, but there were a couple that ran far deeper. I thought it was enlightening, so I thought I'd share a bit more concerning that.

If you don't know what I am speaking of, here is that post's link. Please go back and get caught up so the rest makes sense here....

Okay, so what I got out of some of the feedback was that many of you recognized that this is really a cultural issue. This whole bicyclists getting struck down dead thing is basically a symptom of deeper issues the culture has with how our lives, especially in the US, are centered around cars. One of the things going around now is the ridiculous amount of car parking we give space for in our urban areas. That is one example of how deeply we went in for cars and how our lives are centered around these plastic, rubber, and metal cages.

It's a really complex ship that will not get turned around easily. I think sometimes we get overwhelmed by the complexity and enormity of these issues, but in reality, all we can do is change small things now and leave it to future generations to finish up. This isn't an issue that happened overnight and it won't get solved in a week, next month, next year, or in the next decade, most likely.

When I used to watch the Tour I was always amazed that the organizers allowed crowds to interact with the riders so closely. Obvious issues with this policy have caused troubles going way back. Most famous being the Eddy Merckx punch in 1975 and then Lance Armstrong getting taken down by an errant musette bag wielded by a fan. Now we have a rider taken out of the race due to fan interaction, another punching incident, and people spitting (again) at riders they don't like.

The women are clamoring for their own version of the Tour. Maybe we should cancel next year's doper infested, boorish fan attended men's edition and start all over again with the women's version of the TDF. It has to be better than this circus side show. At least from what I am hearing. It's hard to ecape this stuff when you follow so many cyclists and industry folk on social media.

Okay, so that's that for this week. I'll have some last minute updating on the Guitar Ted Death Ride Invitational for the 28th, and an update on the pMCD build, all coming next week. Stay tuned!