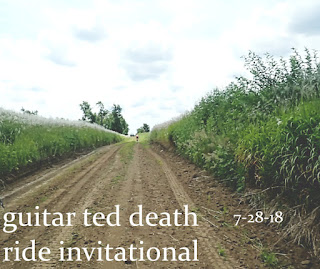 With less than a week out from the 2018 version of the Guitar Ted Death Ride Invitational, I have a concern that needs to be dealt with. Apparently there seems to be the feeling that there may be a lot of people showing up for this year's ride. But that's the problem. It's a feeling only.

The average number of riders that usually show up- around ten or so- would be no big deal. Ten cars on Reinbeck's Broad Street would be seen as unusual, but it wouldn't be a big deal. However; if 20 plus cars show up, well, that's a different story.

So, if you think you are going to show up, please comment here or send me an e-mail at g.ted.productions@gmail.com so I can make an announcement on parking, if it will be necessary.

In other news- the course got lots of rain last week, so no recon was accomplished over the weekend. I hope to check out a couple things Wednesday, but no guarantees there. Stay tuned.......
Posted by Guitar Ted at 12:30 PM

I’m in unless I see lightning, then I’m out.

I will not be coming. (family commitment for lunch on Saturday)

But if you are going to have more people showing up I would suggest using the parking lot next to the community center, one block farther up the road from where you suggested (across from the UCC church). It has been a number of years since I was often in Reinbeck, but that lot was very rarely used and should hold about 20 cars. You are probably already doing it, but a call to the local PD clueing them into why there is a group of out of town cars parked in town might be a good idea.

Thinking of riding a single-speed cross bike (because it's so fun!) instead of the geared cross bike I'd planned on. Anyone have thoughts on this? I've been doing quite a few longer rides on the weekends in a place with some pretty good climbs and it's gone just fine.

@Josh- I've ridden a single speed quite a bit through a good portion of this course. With the forecast calling for cooler temps and not much Sun, I think you'd be fine with it. There are some beasty climbs though, just so you are aware.