Back in the 1990's when I started working at a bicycle shop, it was the heyday for anodized parts. You could get almost anything in a rainbow of bright colors. Even crank bolts were anodized, which was a bad idea, by the way.

Then came the 'dark days" of everything being black anodized. Uggh! So bland and lifeless! You could hardly find anything in a color other than black for many years, But thankfully those days seem to be behind us now.

There are now a lot more things you can get to dress up your bike that have color. Orange Seal recently sent out some sealant, tape, and this fancy valve kit to RidingGravel.com for review. (Note- I did not pay for this kit and I am not being paid to say anything about it here.)

Back in the 90's, it was kind of comical because when anodized parts came out in any certain year, it was always a situation where one color seemed to dominate. One year it would be "ultraviolet", and everything would be anodized that color. The next season it would be turquoise, and then red. Things would not sell well if the color wasn't "hot", and retailers got bent about getting stuck with all that purple stuff when blue ano got hot, and on and on. Fashion plates, we mountain bikers were. Terribly vain.

I won't even get into how one company's blue would be lighter than another company's blue, so parts wouldn't matchy-match. Oh the drama!

So, that whole, "Let's just make EVERYTHING black!" mode we went through is completely understandable now. But it looks as though the color barrier has been broken, and now you get a choice in which colors you want. Don't like red? Doesn't match your bike? Fine, use the orange ano bits. I like that about this kit.

What I am not sold on, and this goes for most all tubeless valve kits, by the way, is that we keep using these silly Presta valve nuts. Who can tighten those properly without using a pliers or some tool to generate enough force to create a seal on the inside of the rim/valve interface? Now if they were a different shape, (see Problem Solvers bit here), then yeah. Make those and have colors, but these goofy little bits are almost useless, and made from aluminum? Yeah...... Double that for the valve itself. I'm not a big fan of the aluminum valve stems. Those threads aren't necessarily up to the task of handling a lot of torque necessary to create a seal on the base of the valve. We will see....... 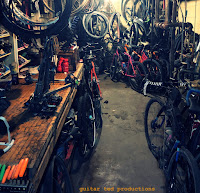 The Effects Of This Pandemic On The Bike Industry And Locally:

So, I thought I would take this space on the weekly FN&V to give you all an update on what this crazy situation has done internationally, nationally, and locally to the world of bike shops and cycling in general. Obviously ALL facets of our lives have been disrupted, but this will focus only on the bicycling bits.

Internationally supply factories and supply chains are reeling from closures and travel restrictions. Some factories are coming back online but in a new, limited fashion to protect employees, (at least in Europe), but many European factories remain closed and may not open until mid-April. This means that spotty availability of parts is to be expected. Baby those drive train parts folks, because things like chains, cassettes, and chain rings will be hard to come by later this year. SRAM makes most of their chains in Europe, as an example, where factories are shuttered for the most part. We're also hearing Shimano will be short on chains and cassettes. So, think twice before you go off into that gritty mud and nasty road you wanted to get into on your adventures this year.

Furthermore; European companies are reportedly slashing R&D, marketing, and staffing numbers by up to 70% in some cases. This will translate into fewer new products, less "news and reviews", and a generally quiet front in several cases from many brands. Plus, yesterday the biggest distributor in the US, Quality Bicycle Products, axed a bunch of people from their employment roster. I happen to know a few of these folks. Sad to see it......

Nationally bike shops are all over the place with service and in being open at all. Some shops are slammed while others are seeing less business, while others are closed up for the foreseeable future due to the pandemic and/or local and state decrees. Most, however; have been deemed "essential businesses", and are open in limited fashion. Appointment and online shopping options with shipping or drop off/pick up services are now being offered versus open door situations which were the norm before all this happened.

Locally we are mostly doing okay. We have a big network of recreational trails and with almost every social gathering place off-limits now, the recreational opportunities are seeing heavy pressure. Shops are using closed door, by appointment, deliver/pick-up options with online shopping as a means to service the area. Specifically to me, I am wrenching on tune-ups and doing service work while Andy does the pick-up/delivery service. I've been able to stay safe and busy so far.

While I don't know what the future has in store, I can say that I've never seen so many people walking, running, or cycling in this area as I have this week since the weather broke. (Well, for most people. I don't go by such temperature restrictions) This new pressure on recreational facilities and areas has actually caused some governments to shut down these areas due to fears that people are not social distancing themselves. I can say that this is likely the case here, that people are not practicing strict social distancing, but again- who knows? When you see two people walking together, how do you know if they live together, or are from separate households? You don't. It's a crazy game and there are no good answers short of enforcing martial law to make sure social distancing is practiced..

On a lighter note, I see nationally where air pollution has subsided to the point where local sensors in the New York area are so low that the monitors are indicating that they are malfunctioning! Record clean air measurements are being recorded in the Los Angles area. One has to wonder that these days aren't telling us something about how we have lived, and how wrong a lot of that was.

Well, who knows what will happen, and maybe a LOT of things won't happen in regards to events, but I do know that the Renegade Gent's Race was supposed to be happening tomorrow.

Ten years ago I was invited to do a funky event where five people were to ride together and complete a metric-ish century on gravel. The team had to stay together and work together. I was invited by Trans Iowa rider/photographer/volunteer, Steve Fuller to join him and three other guys I'd never met before to do this thing with a bunch of Des Moines area folks I didn't know either. I was a bit anxious about it all, because, well, cycling folk could be clique-ish and maybe I would not get on with these people. I had no idea what to expect.

Turns out I made some really good new friends out of the deal. The three new folks to me, Sam, Dave, and Bob, all were really great folks. I came to look forward to each April afterward as my chance to reconnect with them and have a good time. Sometimes too good of a time. Ah! Memories..... Made several on those past Gent's race weekends. Look for a special "Gent's Race Review" on the blog tomorrow which will show some of the images from the past years of this event.

Again, who knows what will happen. The organizers are still thinking and whether there is a Gent's Race later in the fall or next year, I don't know one way or the other. I do know that this could be it. And tomorrow would have been a decade of Gent's races. I'll be riding tomorrow solo and doing some reminiscing along the way. I'm sure I'll be smiling too......

Mike Varley, the brains behind the brand, designed this rig as a drop bar, rigid only mountain bike capable of accepting 650B X 2.8" or 29" X 2.4" tires. This rig will have multiple mounting points and can be set up 1X or 2X as far as drive trains are concerned.

So, a wider tire compatible MCD then? No- not really. This bike will likely not take big chain rings like the MCD, so we're talking a bike more like a Fargo. In fact, I would say that besides the LaCabra not being single speed compatible, this bike out-Fargos a Fargo. MTB drive train, big tires, and no need to have a suspension fork. The details of the frame look very "MCD-ish", but I am sure component capabilities will place this firmly in the Fargo/Cutthroat category, as far as bikes go.

Do I want one? Well.....duh! Do I need one? Hmm...... Here's where I stand on that. The LaCabra, if indeed it makes it into reality- let's not forget the changes we've seen in less than a month already - well, this could be my main mountain bike. Plus, I could see this becoming the sort of bike I'd take to certain places like West Central Nebraska, (Odin's Territory) to ride, or to a wetter event, or just to go camping with. I could see this being set up with the poofy 650B X 2.8's and my current Fargo being the 700c bike. I basically had that same set up with the old Fargo Gen 2 I used to have here. That bike carried me through most of the muddy year at DK, and at Odin's the last time I rode out there.


That's it for this week! Thanks so much for stopping by. I hope that you all are staying healthy, safe, and still getting out on rides.

My sincere hope it's that some of the events that are now overflowing into the Fall will have to be run on a Sunday.I am keen to do a race-type event, but working Saturdays is a must for me, so I miss most of them. Remember when race day was Sunday? Or the Chi-Chi's event calendar?

that BMC looks cool! Any specifics on the road shifter/mtn derailleur spec?

@DT - I know (from seeing other images of this bike) that Mike is using GRX shifters. Those will shift a 1X Shimano GRX derailleur that goes from 11-42t on the cassette. (I have a similar set up- just a bigger drive ring)