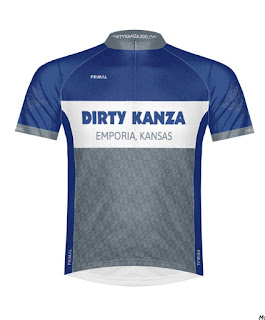 Tuesday afternoon the expected, but sad news that there would be no Dirty Kanza 200 at all in 2020 was released to the public. Coronavirus concerns were, of course, the stated reasoning behind this decision. As I have said many times here on this blog, and elsewhere, this was the only reasonable conclusion to this dilemma.

Now that the expected news has sunk in, we have a very unusual situation here to consider, Obviously there has been controversy surrounding the name "Dirty Kanza" and additionally, the last standing co-founder of the race is no longer a part of the proceedings. Jim Cummins was recently let go over a dust-up concerning a social media post on his personal social media account. With those two set backs, and the cancellation of the event, Life Time Fitness now has an opportunity to make sweeping changes, many changes, a few changes, or none at all.

Here is what we do know: Jim Cummins was one of the co-founders of the Dirty Kanza 200 and considered to be the "face" of the event, (now being referred to as the "DK" by the promoters and Life Time. More on that in a bit), and many fans of the DK say they won't be back if Jim isn't a part of things. These sort of comments were common on social media directly after Jim's release from his position by Life Time.

We know that a LOT of social pressure is being exerted by sponsors and certain activists on Life Time to change the name of the event. What has been said is that there will be a rebranding and that will be rolled out in the coming months.

Comments: The Dirty Kanza 200 died as an event on July 7th, 2020. It's over folks. The name is changing, yes, but that's not all that will be changing. While the promotions team at Life Time, including long time heads of the event, will strive to incorporate things they believe will be honoring to the core values of the event, it is without a doubt going to look and feel like a brand new event that just so happens to be occurring in Emporia Kansas around the time that the old DK200 happened. Life Time will implement directives to be more socially aware, which may or may not be obvious come 2021, and their team there that is left will be free from any influences Jim Cummins may have exerted on the team in the past. In fact, it wouldn't surprise me at all to see a large move away from much of what Jim, and Joel Dyke conjured up in 2006. Some would argue that ship sailed years ago. That's a strong argument.

What is really kind of sad and will make for tragi-comic results if not handled well, is what the rebranding will entail. There are already names being bandied about for the event which are being put forth by interested parties- (read sponsors and endemic media)- and it is quite likely that something more corporate will win out over something tied to the origins of the event. The news about the cancellation, first shared by "Velo News", links a June posting which suggests the name "Gravel United", for instance.

That's a fine name, for a corporate event. It also shows the lack of understanding when it comes to how all this got started and sustained itself until the possibilities of money making became too great to ignore. I remember when folks at "Velo News" thought gravel racing was.....ah...cute- shall we say? There were less glowing terms bandied about for what we were doing, all the way down to "it isn't real racing". Once Jim Cummins and his team installed chip timing and the now famous DK200 finish line circus, and after the endemic media and outside interests saw the money flowing into Emporia, then and only then was the DK200 taken seriously by the big sponsors outside of cycling, the media writers, and Life Time Fitness. Obviously, Life Time scooped up the event, which is called the "highest-profile gravel race in the world", ( Velo News' words, not mine), and planned on making a few ducats off the scene's popularity. Unfortunately, that plan has been interrupted by an unforeseen virus and an unfortunate social media post by the former "face of said event".

Now the scrum to grab something from this internal chaos has started. Renaming the event is only a part of this. How the newly named event will go forward now is at stake, and whomever, or whatever gets their mitts on the steering wheel, will have the power to drive this "high profile gravel event", and all that comes with that recognition, into the murky future. If you don't think there will be massive changes in look and feel to this event, well, you are not thinking straight. I'll say it again- The Dirty Kanza is dead as we once knew it. Whatever it is that will take its place will be a corporate production ballyhooed as "The Greatest Gravel Show On Earth", cost three figures to get a chance to have your name drawn in a lottery to attend, and will start to be more of a professional calendar event.

I expect that USAC will be making some overtures here, as they are still sitting outside the gravel scene, wanting in, but not having a seat at the table.....yet. Maybe they will never get in, but make no mistake- The Life Time backing of this event, with no shackles to the past in the form of the DK200, will make an event to their liking, and whatever they roll out will be the prototype for the big media and big sponsors and brands of cycling to get involved with. This will be the directive- Get bigger, get more attention nationally and internationally, and increase the corporate bottom line. If that means a Pro UCI type event, then don't be surprised to see that happen. But there is no way this is anything like the pre-Life Time DK200 ever again.

That ship has sailed.
Posted by Guitar Ted at 1:30 AM

Reading this makes me feel for the people of Emporia. As one who lives in a small mid west town, I've come to realize a small town's identity and community spirit is often wrapped up in the events associated with that town. Also, small towns can be very protective of their own. Makes me wonder how they feel about Mr. Cummings being booted out by life time. As I've observed from "corporate", it's about sustaining the the life of corporate, not the people. One thing I've come to appreciate is, that with T.I., you've always displayed a sensitivity to the effect that event had on the small towns it passed through.

@graveldoc - Thank you and thanks for bringing up the topic of the effects that this may have on Emporia. Fortunately, there are two people on the DK promotions team who are VERY passionate about this topic and I have confidence that they will be very proactive in making sure Emporia and its businesses are represented in whatever outcome from this happens to be. One other on the board is a Life Time employee. I'm not sure what the other person's background is, but she is a Kansan, so I assume she has an interest in seeing that Emporia comes out on the good side as well.

Obviously, as I stated in my post, this situation could turn out badly, but it also could turn out really well for Emporia. I do believe that there is a distrust of Life Time stemming from their status as a corporation and from their actions concerning Jim Cummins. However; IF there is a way for Life Time to break that distrust, they must find a way so that this event will still have the backing from the residents of Emporia that it has enjoyed over the last 15 years.

That's going to be a tall order for Life Time and the DK promotions team, but I am quite certain that they are very concerned about this and are working on solutions. How their plan plays out over the next six months will be interesting to see.

Le Grind will give you the same Emporia gravel without all of the corporate BS. After 8 years, we didn’t even enter the lottery this year. It lost its magic over the last few years. Local riders are now all sponsored by someone. BTW, I have 6 racist kits for sale ��