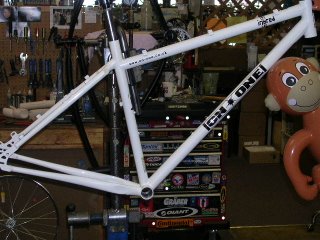 After a couple posts on frame details and the like we finally get down to business! How do these two frames compare when built up and ridden as single speed bikes?


First, let's look at the Karate Monkey. When I built this bike up in 2003, it was also my first single speed and my first 29"er! Alot going on all at the same time! I have ridden this bike pretty consistently since then, though so I feel that I can give you all a good impression on it's ride quality. 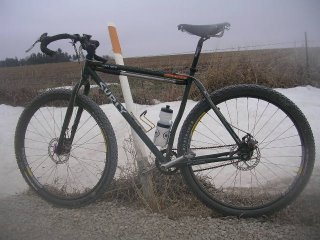 I must say that it's a bit less forgiving than I had hoped. Not bad, but that spring, that magic steel feel......well, it isn't quite there with the Monkey. A couple things to remember here. First, it's not a high end tube set. It's thicker, stiffer tubes will not ride like a finer steel frame would. With that said, I bet this bike would come alive as a loaded touring bike. Secondly, the short exposure of the seat post makes for a stiffer ride. There isn't much standover for a frame this big on the Monkey. I actually am running a road seat post in mine! If it had a longer extension of seat post, the ride would feel less jarring. Again, it's not terrible, it's just not quite up to my standards of what a steel frame should ride like.

Other notable things about this frame and fork setup: The fork is pretty stiff! It doesn't flex much, so the ride is more bumpy. Handling is precise and pretty snappy. The bike as a whole turns well, gets on a different line right when you want it to, and handles single track just dandy. The bottom bracket sways noticeably under heavy pedalling. There is no chainstay brace, which might contribute to this a bit.

Track ends and slotted disc caliper mounts are a pain! Give yourself a half hour for a rear flat repair. Better have nice, long allen keys to develope enough torque to re-install your caliper when the job is finished, too. No fenders that I have found really work on this without modifications. This is especially true with the disc calipers installed. The rear braze on for the last run of housing before it would run into the rear derailluer sticks out at just the right angle to snag your heel cup on your right shoe. I ruined a perfectly good pair of Lake cycling shoes this way! Grrr!

The Inbred has that steel feel to it that the KM lacked. It springs forth in a way that makes fans of steel smile with delight. I cannot explain to you just what that is, but you ol' steel guys know. Yes...you know! I think part of the smoothness of the Inbred has to be the long seat post extension that is required of the design. I am running a 400mm post on mine. This is going to give you......well, alot of give! The compactness of the rear triangle matched with a more compact bottom bracket/front triangle design makes for a more flex free bottom bracket area, even without a chainstay brace. Those little "Bontrager-esque" gussets help here perhaps?

The Inbred cuts a corner with a little less input and a bit more precision than the KM. This is no doubt in part due to the different rake on the fork that On One uses, which quickens up the steering a bit over the "standard" 29"ers out there. The fork is quite compliant, giving a smoother ride. Not noodly, not throwing you off line, just not tooth-rattling stiff. It is a rigid fork, after all. The bike carves turns and also seems to behave very well under stomping up climbs and over very rough terrain. Single track is it's home. I can't find fault with it's handling. It's very much like my old Bontrager in this respect, which is high praise. That ol' Bontrager was awesome!

Other things of note: There isn't much to recommend this to touring cyclists, commuters, or the like. It's a purpose built mountain bike! The sliding drops are a bit troublesome. I have had the drive side slip forwards, as the provided chain tug is capable of flexing outwards and allowing the wheel to cock sideways in the frame. I have used an extreme amount of torque on the two allen bolts that fix the slider to the frame, but to no avail! I believe On One has a beefier tug coming out which should solve this problem for future owners of an Inbred. It also will be available separately for those of you already burdened with this problem.

Tomorrow, I will detail some of the parts highlights of these two bikes. Thanks for reading!

Please continue to give us feedback on the question I raised concerning Trans Iowa. Your feedback is very valuable to us! Thanks!