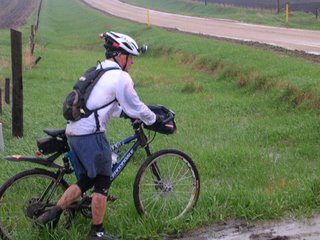 Today's Trans Iowa photos will focus on the two Canadian riders that ended up being the ones that got the closest to Algona Checkpoint.

The first picture is of Lindsay Gauld on his Scalpel coming off the "B" road section just before Sutherland. If I was told correctly, Lindsay is a 57 year old bicycle courier in Winnepeg. I heard he puts in about 80 miles every day at work. It probably helped him that his work makes him ride in all sorts of conditions! 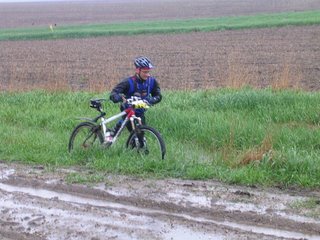 This picture is of Dallas Sigurdur who was riding a Norco hardtail. All Canadian baby! Dallas is into running and did most of his training by doing ultra long runs. It seemed to pay off for him in this event. Dallas switched his bike choice three times before settling on this Norco!

The thing that I believe really helped these two and a few of the other riders up in the front of the race was their mental attitude about what they were experiencing. I remember Dallas smiling and laughing as he was walking his bike down the ditch in that picture above. Others were doing similar things. Smiling, laughing, and having a great attitude about the situation. I learned alot from their examples.

Really, overall the event was dominated by everyone having a great attitude and not getting frustrated to the point that they outwardly showed it, at least in my sight and hearing. I was quite honestly amazed by this. I fully expected there to be some serious bitching from folks not happy about the conditions, the way the event was run, or by decisions that Jeff and I made. There was none- zero- nothing of the sort to be found.

In fact, even in the blog posts that I have read and in the online forums that I have visited there has been no negative commentary. I haven't found a single recounting that didn't say in some way that the individual got alot out of their experience at Trans Iowa V2. Some even saying that they want another crack at it!

So, will Jeff and I run it again? We'll decide later in the year, after all of this hoopla dies down and ya'all have time to re-think this. If it's that important to you, please sound off in the fall to let us know that your still thinking about it. We take all your comments to heart!
Posted by Guitar Ted at 5:08 AM