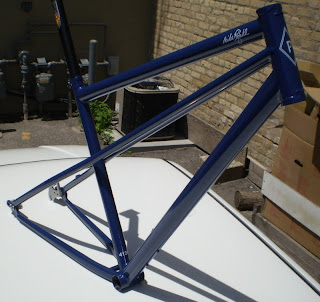 Well, it's home now. The frame and fork formerly known as Secret Project #2 is now in the workstand in the bowels of the Guitar Ted Labratories awaiting it's adornment with parts.

The parts list will go up soon, right after I figure out exactly what is going on it! No worries! I have alot of it figured out, just not completely figured out!

Industry 9 wheel set with orange hubs, silver spokes, and black DT Swiss TK 7.1 disc only rims will be carrying the lone Surly single speed cog with the requsite Surly spacer and lock ring kit. I'm having to tear down my Karate Monkey for a long overdue overhaul, so it's donating the Cooks cranks and Avid BB-7 brakes. I'm hoping the old Shimano bottom bracket cartridge still has some life in it yet and that it's the right size! I'll be having to order a 185mm adapter for the front wheel's caliper though. The I-9 wheel has a brand new set of rotors on it and the front is a 185mm. The head set is a Chris King special color mix. Orange bottom cup, blue top cup, silver bearing cap.

I'm still needing to figure out a seat post, (26.8mm) the steering controls, (Gary Bar? stem?), cables and housings, and wheel skewers. Nothing too major. This was to get a custom stem/handle bar, but the originally chosen constructor is ignoring e-mails and calls from the shop I purchased the frame through, so for now, I'm going to run a drop bar and stem. Not a big deal to me in the grand scheme of things since that was my original plan from the start.

(Just a clarification: The frame maker was awesome and not the same constructor that was to build the bar/stem.)

There still is a chance this will ultimately see the custom Bull Moose, but I'll let that simmer for now! In the meantime, there is a bike to build. It might take awhile, so don't get too excited! Not that you would. More to come..................