Have you ever wondered why it was that your old bike when you were a kid hardly ever needed air in the tires? Have you noticed lately that tubes for bicycles, (that is- if you still use tubes), are seemingly smaller than you remember? There's a reason for all of that. 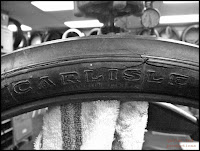 First of all, tires were a lot heavier than they are today. No......a lot heavier as in waaaay more than you think. We get to repair a lot of bicycles at the shop where I work, and there are a lot of oldies being drug out of the woodwork. Not 70's bikes either, I'm talking about 1960's and previous stuff, like this Carlisle tire I have pictured here.

There is an order of magnitude to how much lighter things have gotten in the past 40-50 years in regard to many of the bicycles average folk use. The first level was achieved when we got the "lightweight" bike boom in the 70's. Remember Schwinn Continentals and Varsitys? Yes, they were "lightweights" for the day. The 80's and 90's came and things got even lighter, but that's another story, and I think you get the picture here.

The point I am trying to make is that the heavier tires didn't leak air as fast as the lighter, thinner tires of today. Then there are the tubes that go inside of these tires. Once American Made, they are also much lighter and thinner than before.

There is more rubber in that old tube than there is in the replacement tire I put on the old rim! The wall thickness of this old tube is just about akin to what the thicker part of a thorn-proof tube has for rubber. Obviously, what passed for 2.125" in the 50's and 60's is not what we have for that measurement today. (Gee....I wonder if my old elementary school rulers were actually longer too?)

The combination of really heavy, thick tire and really heavy thick tube resulted in a product that obviously weighed far more than similar combinations today, took more effort to ride, and had far worse rolling resistance than modern tires and tubes. The upside here was that stuff lasted forever, (to wit: This tire and tube could still feasibly be ridden), and you hardly ever had flats or needed to maintain air pressure. Bad ride quality, more effort to pedal, but dad-gummit, that stuff lasted fer-ever, and I never had ta put air in them thar tires neither!

Oh how the times have changed!