Last weekend I decided it was high time that my son experienced the "beach combing" capabilities of his new fat bike. I'd been telling him all about how we could do this for awhile, but I knew he'd just have to experience it for himself to really "get it".

Of course, it was also going to be a partial night ride, since the Sun is setting so early now, so we strapped on lights and headed out down the Green Belt. There was still a little snow and ice left over, even though the temperatures had been high enough the day before and earlier that day to obliterate most of what had fallen. Still my son was thrilled by his ability to cruise right on over the snow patches we did discover.

At one point, I heard my son cry out and he was down. A slight off camber sent him down that was muddy, greasy, and the Big Fat Larry couldn't deal with it. Same issues I had with those tires, he was having. Looks like something like some Nates will be in his future. But we finally got going again and reached the lake where the low water levels of late have revealed a big chunk of sand to ride on most of the way around the lake now. 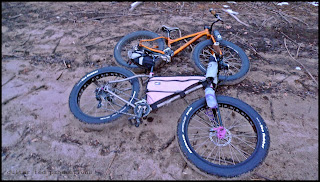 Once down on the beach we had no trouble rolling along. We just had to be wary of the washouts due to drainage and some bigger branches that had either fallen across our path or that had been washed up by the waves.

While it is a pittance of what this guy gets to ride for beaches, it'll have to do for us! Call it "beach single track", if you will, but it is all we have and it still makes for a lot of fun. We leave little trace of our passing and ride where my 29"ers would have a very difficult time going, if they could go at all.

Of course, my son, being 10 years old, had to stop to toss some sticks and watch them slide across the ice. He also was sorely tempted to go ride his bike out onto the ice, but the ice is no where thick enough for that just yet, so I had to restrain his enthusiasm there!

After our "stick tossing stop" we hit the lights and rolled back towards home. My son is still a little unsure in the dark, which caused me some anxious moments but we arrived back home in one piece with no further incident. Mrs. Guitar Ted was quite happy to receive us with relief, (apparently she worries about us!), and then we sat down to a mighty fine dinner. A great way to end a long weekend off from work!